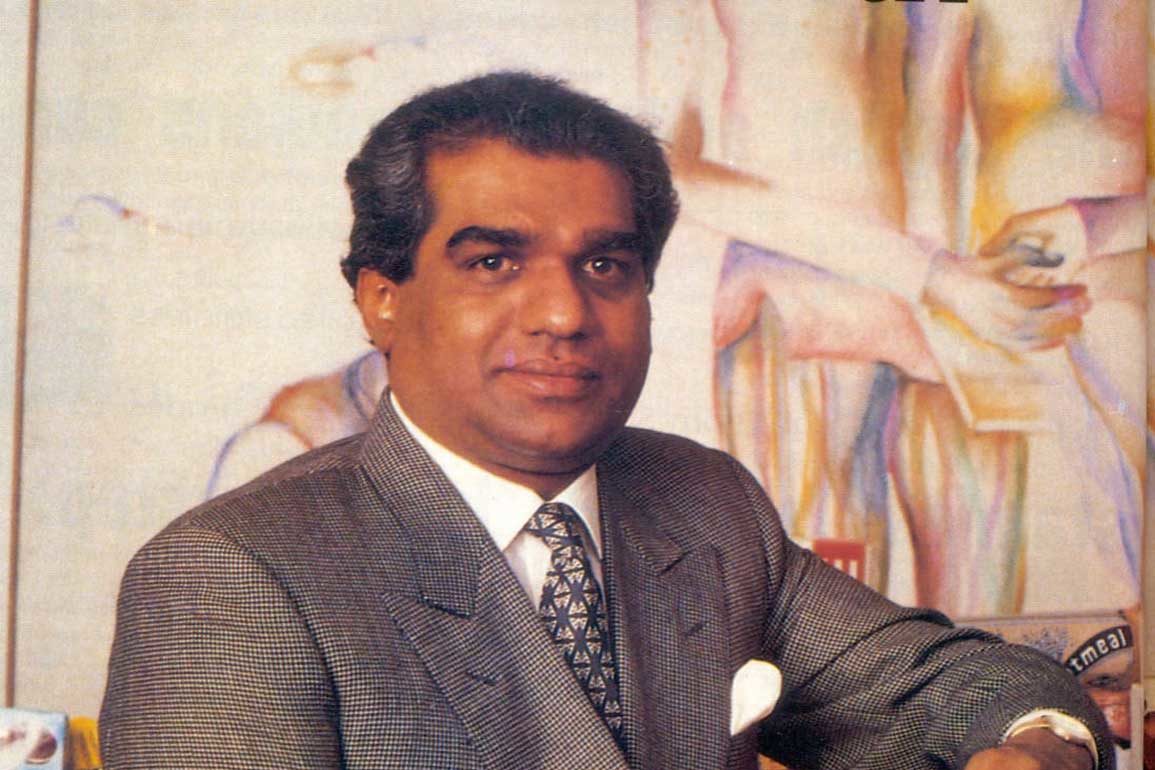 A quarter century after Rajan Pillai’s death, this Kerala businessman’s ambitions to conquer the international food business and his sudden demise is still looked at with awe and disbelief. Hailing from the coastal town of Kollam, Pillai dreamt big—he dreamt of heading the world’s largest food firm by 2020 but his dreams were dashed right in the middle of his ascent when he died under mysterious circumstances in a jail cell in India. The Kochi Post looks back at the life of Rajan Pillai then popularly known as the ‘Biscuit King’.

For his immediate relatives, his death still remains a huge loss as the battle waged by them to get to the truth regarding his death has not borne any results. Rajan Pillai’s parents K Janardhanan Pillai and his wife N Rajamaniamma underwent immense mental torment after the demise of their son in 1995. Janardhan Pillai died in 2005, followed by his wife Rajamaniamma in 2015.  Recalling those difficult days, Pillai’s younger brother, J Rajmohan Pillai, said that in their hour of crisis, none of their friends and relatives were of any help to them. Rajan Pillai was just 47, helming a 1300 crore ($400 million) business empire across six countries, when death beckoned him.

“Our parents endured the spate of events with a heavy heart as their brightest son passed away while they were still alive. My father suffered a stroke and he never recovered from that and was not able to walk anymore. However, the attitude of a few of Rajannan’s (Rajan) friends hurt us as they did not help us,” he remembered the days when Rajan Pillai was imprisoned in Tihar Jail after a financial fraud case was registered against him in Singapore. In fact, there were cases in four countries borne out of business rivalry after Pillai took over various business enterprises. Huge amounts were spent as legal fees for litigation after his death.

“The days after the death of Rajannan were fraught with troubles as I was made the director of the ‘Thai Agri Food’ (then second largest food firm in Thailand) and the ‘Wildman River Plantations’, a 5-lakh-hectare cashew estate in Australia.” There were financial liabilities as part of taking over the assets, including the huge bank debts which he settled only as recently as December 2018, he claimed. The 5-lakh-hectare cashew plantation was nationalised by the Australian government and the compensation was given to Gopika Nina Pillai, widow of Rajan Pillai.

Rajmohan said that he was made the executer of the ‘Will’ of Rajan Pillai registered at London. However, after the latter’s untimely demise, disputes over succession arose. According to the ‘Will’ of Pillai, the assets were to be divided into four—Nina Pillai, his two children and Rajamaniamma (Rajan’s mother). This was challenged by Nina Pillai. However, Rajamaniamma relinquished her claim later, said Rajmohan. One of Rajan Pillai’s sisters (he has six) who was approached by The Kochi Post refused to comment on the issues maintaining that Rajmohan knows the developments better than them.

The sense of loss was echoed by Pillai’s maternal uncle and cashew baron and film producer K Ravindranathan Nair aka ‘Achani’ Ravi.  “The loss for us was terrible and we are yet to recover from the sense of loss. Now both his parents have passed away after years of pain from the tragedy,” he said. According to him, the cases were registered against Pillai after his equation with F Ross Johnson, the then CEO of RJR Nabisco (RJ Reynolds and Nabisco operated as a single entity in the nineties) became strained.

Rajmohan said that it was Rajan Pillai’s dream to own the world’s largest food firm by 2020. The energy for developing and acquiring new businesses was a rare quality in Pillai and, in the beginning of the nineties he started acquiring international business firms, revealing his intention to become a major player in the food business.

For many people, the case against Rajan Pillai and his sad end was a by-product of internecine corporate rivalries. Rajmohan alleged that the ascension of Pillai as the Chairman of the Britannia group in the 1980s was not taken well by his benefactor Ross Johnson, then CEO of RJR Nabisco, and Nusli Wadia, the Mumbai-based tycoon who wrested Britannia from Pillai in 1993.

Ravindranathan Nair recalled that a representative of Nusli Wadia was present at the funeral of Rajan Pillai. However, there was no discussion of the case or his death. Rajmohan alleged that Ross Johnson helped Groupe Danone (an equal partner in Britannia, brought in by Pillai) and Nusli Wadia, to take over Britannia industries thereby ousting Rajan Pillai. Nusli Wadia became the Chairman of Britannia industries after the removal of Pillai and Wadia continues in that position even to this day.

There were several cases registered against him in Singapore who were looking into his financial dealings. Ross Johnson who had fallen out with Pillai influenced that alleged Rajmohan. Pillai fled Singapore to Mumbai on April 10, 1995, hours before he was to be sentenced to a possible fourteen-year-imprisonment on 23 counts of breach of trust and one of cheating by the Singapore court.  Later, he secured a bail from the Trivandrum additional chief judicial magistrate, later quashed by the Kerala High Court and an extradition court was set up in New Delhi. Pillai was arrested following a non-bailable warrant and was sent to Tihar jail.

“It was Rajannan himself who told us about the conspiracy angle. But we have no proof to establish their role in the course of the incidents. However, the beneficiaries of his death were Nusli Wadia and Groupe Danone, a dairy major in Europe. Rajmohan says that their moves to investigate the negligence meted out to Pillai’s treatment in jail went in vain as the Parliament and the apex court turned them down. He compares Pillai’s death with that of Thakiyudeen Wahid, the promoter of East-West Airlines who was gunned down by alleged underworld elements in Mumbai after his airlines emerged as a major player in the aviation sector. He laments that the real story of the business rivalry often goes unreported for various reasons and PR work.

In the biography of Rajan Pillai’s father, K Janardhanan Pillaiyude Jeevitham – Dhaivathintey Natakam, published by Current books, Nina Pillai alleges that Ross Johnson and Nusli Wadia were behind the move to oust Rajan Pillai from the chairmanship of Britannia industries in 1993. She also states that Rakesh Saxena helped her husband to get a loan from the Bangkok Bank of Commerce for purchasing ‘Thai Agri Foods’ after he lost Britannia industries. Nina Pillai also claimed that Chandraswamy, the controversial godman, came to help Rajan at the behest of Rajeev Saxena as Saxena was a disciple of the godman. Chandraswamy got a huge kickback from Rajan Pillai, by offering him help to relieve him from cases in Singapore by influencing Indian political leaders. In reality, Rakesh Saxena and Chandraswamy were not helping Rajan, instead they were harming him,” Nina Pillai alleged in the book.

The family not delivered justice

“For us blood relatives, we have not received justice as the suspicion over the circumstances that led to his death are still unresolved,” says Rajmohan Pillai, who still believes that there was a conspiracy behind the treatment meted out to his older brother in Tihar jail. He alleged that political influence was exerted by rival business groups which deprived him of medical treatment, despite their counsels presenting his medical documents in Court. Rajan Pillai was suffering from liver cirrhosis. However, none of the political contacts of the family including former Congress heavyweight K Karunakaran was able to help them.

“Karunakaran, a close friend of our father was at his weakest point in politics after the ISRO spy case was levelled against him. An order from the Ministry of External Affairs could have helped prevent the extradition of Rajan Pillai which was not possible due to the absence of political pressure and mounting pressure from the rival groups, he says.

The battle for justice

Gopika Nina Pillai, the widow of Rajan Pillai, waged a ferocious battle seeking justice for her husband, alleging that her husband was a victim of a conspiracy. She made this claim before the Leila Seth Commission entrusted to inquire into the facts and circumstances leading to the death of Rajan Pillai, whose end came in the Deen Dayal Upadhayay hospital, on July 7, 1995 while he was still under judicial custody. Nina Pillai also contested an election in Kollam Parliament constituency spearheading the issue. However, she also withdrew from her pursuit in the absence of evidence. Nina Pillai now lives with her children Krish and Shiv.

An allegation against Nina Pillai was raised by Rajmohan that at the time the case against Rajan Pillai was on in the court, Nina Pillai wasn’t too keen to spend money for the case. This was also alleged in the book K Janardhanan Pillayude Jeevidham – Davathintey Natakam. Jananrdhanan Pillai said that when Rajan came to Bombay from Singapore, he had to furnish a massive amount as bail money. “Then Nina Pillai, who had 95 crore with her, said Rajan did not earmark that money for the purpose of conducting the case. When Rajan came to know about this, it caused him huge agony.”

Pillai writes in his book that when K K Venugopal, the Attorney-General of India and then senior counsel in Delhi mentioned this to Rajan Pillai, he was shocked. Though The Kochi Post tried to get Nina Pillai’s response for the story repeatedly, she refused to speak on the matter.

Rajmohan said their father used to tell Rajan Pillai that business rivalries should be among equals when he learned about Pillai’s competition with food giants in Europe over acquiring them. Now, a quarter century after Pillai’s death, all legal issues have finally come to a close and the family takes solace that karma will make all those who hatched the conspiracy against Rajan Pillai accountable for their deeds.

“There is no point in continuing the fight as the people who were responsible for the conspiracy are still very powerful and wield huge influence. We are now looking forward to growing our business and challenging their interests, which will be a fitting response to them,” Rajmohan said. 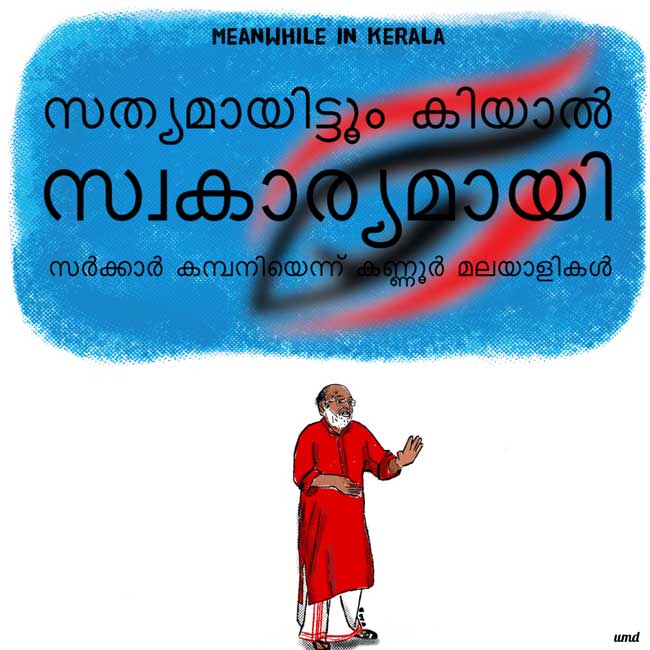