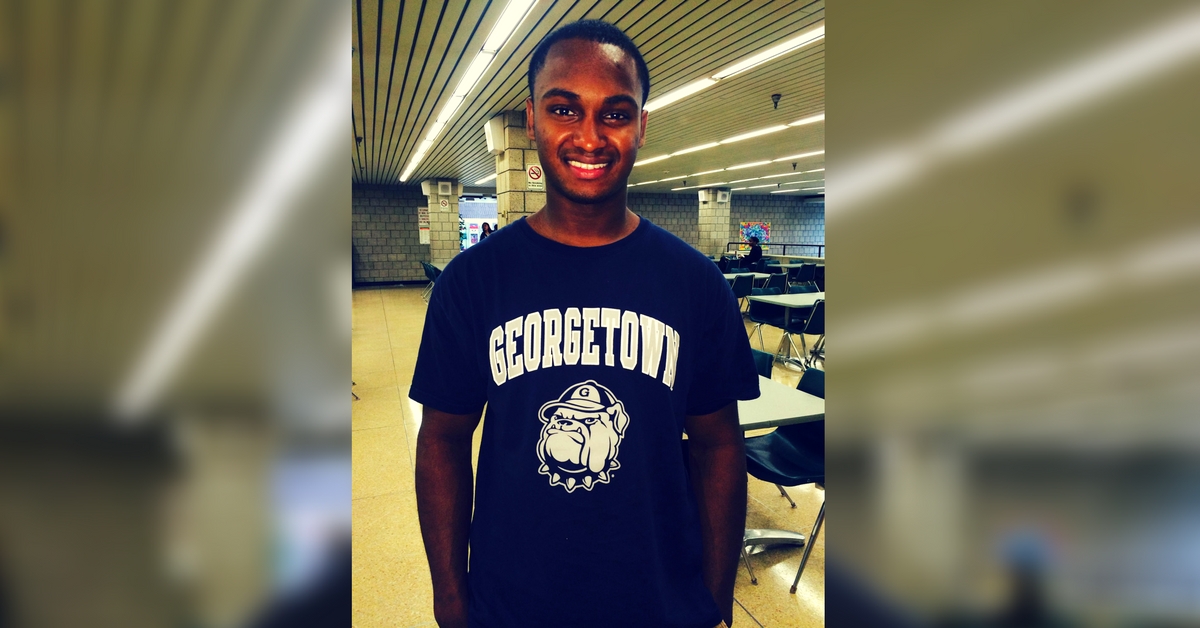 “The simplest acts of kindness are by far more powerful than a thousand heads bowing in prayer.” – Mahatma Gandhi.

All of us have dreams. From a receptionist, to a banker, to the CEO of a company, we all strive to achieve something. For some of us, our dreams take a backseat in the mad rush to earn a living. However, sometimes a helping hand is all we need. This is exactly what Febin Bellamy, a half-Malayalee student at Georgetown University, did when he extended a hand of friendship to Oneil Batchelor, a janitor at the university. Oneil, an immigrant from Jamaica, was the same age as the students at the university but circumstances deprived him of the privilege of education. As the friendship between the two grew, Febin realised that Oneil’s dream was to start a chicken joint. Febin, with the help of his friends, helped Oneil realise his dream.

“I had a rough transition from community college to Georgetown. I would often stay up late until 3 to 4 a.m. trying to catch up on school work.  I used to sit in the rooms on the second floor and I’d always see the cleaning staff walk through the empty hallways, take out the trash in the bathrooms, vacuum the floors, clean the glass doors, etc. I thought about how hard these employees are working to keep our business school clean so that when the students arrive in the morning, we can have a clean environment. I eventually started a conversation with Oneil. After several conversations with him, I made it a habit to always greet a service worker if I ever passed one of them in the hallway.  After learning about his personal story of how he wanted to become an entrepreneur, I remember wishing that everyone would actually take the time out to get to know unsung heroes like Oneil.  And not just facilities workers, but other unsung heroes from different departments within the Georgetown community. What about some of the cooks at our favourite dining halls, or even the construction workers who we often walk past on our way to class? What about the utilities plant workers who control heating and cooling for every building on campus but have never interacted with students, or the service worker who stays on campus for days to shovel the snow just so that our streets are safe for us to walk on? I wanted to give back somehow and as I got to know them on a personal level, I thought about sharing their unique stories and putting them in the spotlight. Every worker has a unique story. We just have to take the time to listen and acknowledge,” he says.

Febin could connect with the emotions of these people because he moved to the United States from India when he was only five. He saw how his parents struggled to raise a family between their studies and work. After his father was hospitalised with a stroke, he enrolled in community college and worked to support his family financially, flipping burgers, scrubbing floors, and cleaning bathrooms at Wendy’s Old Fashion Hamburgers.

He says that this job taught him that every job has dignity and served as the motivation to recognise the workers who do these jobs and keep our communities clean and running – such as the janitors who scrub the floor and clean up our schools without recognition or appreciation. Therefore, he was deeply moved by Oneil’s story and thought even other students at the university must also be told about it. This gave rise to his initiative ‘Unsung Heroes’, wherein he started sharing the stories of workers in the Georgetown community using social media. 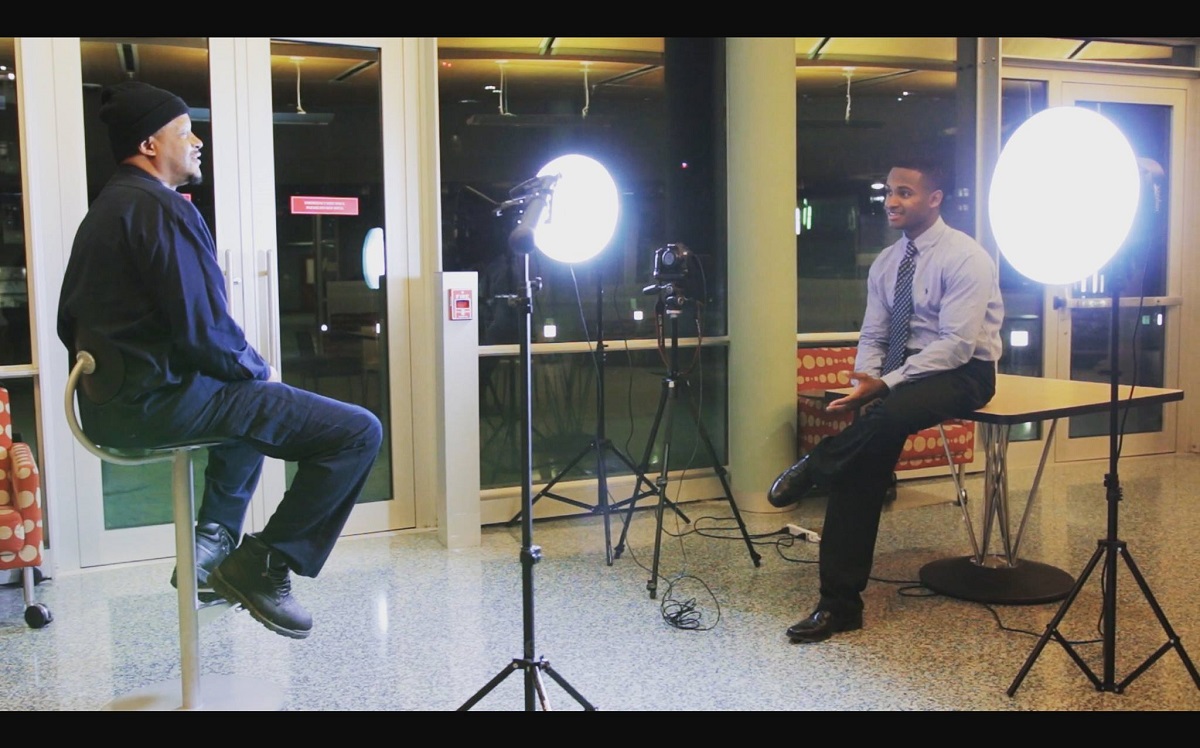 The initiative went on to become a great success and more and more students joined it. Those who read the stories of these workers encouraged them to do what they would love to pursue. As a part of the initiative, they even persuaded the workers to conduct fundraisers. They helped Oneil raise $2,500 in this manner; got him the items required to set up the catering service, and helped him create a website of his own named Oneil’s Famous Jerks. These students also helped Umberto Suru Ripai, the guy who runs the cash register at the dining hall, by raising $5,500 through a GoFundMe page so that he could travel to South Sudan and meet his family whom he hadn’t seen for 45 years. These are only a few examples, but the noble initiative that Febin started is now becoming the reason for many to smile.

Febin’s favourite among all the people he interviewed is Tracy Smith (Unsung Hero #15), a cross walk guard for the campus, who helps students cross the street safely and protects them from incoming cars. He worked at Georgetown for a year-and-a-half. When Febin interviewed him, he mentioned that his father got killed trying to walk across the street a few years ago. He was just a pedestrian. Tracey wanted to redeem his dad and he got a job as a cross guard to protect the students. To make sure that something like that never happens again.

“This was one of the most amazing stories I’ve heard. He isn’t working here because he didn’t go to school or because he is uneducated — as many people often think of cross walk guards and others in similar positions. Rather, he is here to protect the students. He loves his job because he feels that he is able to make a difference in the lives of the students,” he added.

After hearing his story that Unsung Heroes shared on Facebook, many students showed their appreciation for him by going out of their way to thank him, shake his hand, and even give him a hug!  Smith was so moved by this gesture that he said, “I feel like a celebrity”. Febin feels this really confirmed the work that they were doing because they experienced the direct impact of sharing these stories.

The stir created by Unsung Heroes also earned him an invite from TEDx, which he considers a privilege and an opportunity to share his experience and motivate others.

“It was an incredible experience. I talked about my background growing up and how that shaped me into becoming who I am today.  I spoke about my motivation for making a difference, which comes from recognising the workers who are often invisible in our communities. I remember feeling invisible working at Wendy’s. Everyone has a story – even the janitors and other unsung heroes — we just have to take the time to listen and show a level of acknowledgment,” he says.

Febin also has plans to expand the initiative, first in the Washington area and eventually across the country.

Elaborating on how to achieve this, he commented, “So far, over 40 schools reached out to us with an interest in spreading this initiative to their campuses. Right now we are in the process of applying to become a 501-c 3 non-profit organisation and finalising our chapter tool kit.  We have also received enquiries from corporations that are interested in highlighting the unsung heroes of their workplaces. But even looking past just schools in the U.S., we want this to be a movement that can change people’s mindsets in the way they view the workers around the world. Imagine if people would actually recognise the heroes in our communities – who never really get any recognition for their hard work behind the scenes. You would have a happier workplace, people will want to come to work, and feel appreciated for their duties.”

Febin definitely has plans to spread this initiative around the world – particularly in India.

“Both family and friends are very proud of the movement that we started since the very beginning of the project. A lot of my friends in my Business Ethics class played a role in developing the project and I am forever indebted to them.  When we published our first posts on social media in April, 2016, we received great feedback from students on the campus who were thankful to us for raising awareness. Many of the students resonated with the stories of the workers, especially the ones of the workers that they interact with on a daily basis. We got a lot of support from the students and within the first two weeks of launch, we gathered a loyal social media following of over 2,000 people.  Student groups began to reach out to us to request collaboration projects, and we received tons of positive emails and messages of support from students, parents, administrators and alumni alike,” he says.

This Unsung Heroes movement was largely inspired just from a simple handshake – when Febin shook Oneil’s hand for the first time and introduced him and started a conversation. They got to know each other and didn’t judge each other by their position or socio-economic class. This approach allowed them to break the barrier that is between the worker and the student and this really resonated with people because it captured a portrait of the worker’s humanity through a compelling photograph and a quote about him. Regardless of colour of skin or socio-economic background, people connect to these stories.

Febin is half-Indian (Malayalee) and half-Trinidadian and has spent the first five years of his life living in Kerala at Pampady in Kottayam district with his older sister, grandparents, an uncle and aunt. He says that during their time in India, they learned how to speak the local language – Malayalam – and attended Crossroads School. He left India to go back to the U.S. and spent six years living in Brooklyn, New York, and moved to Monroe, New York, when he was 11. Febin regrets that he doesn’t come back to Kerala often enough.

“I went back in the summer of 2015 for the first time in years. But after I graduate from Georgetown, I definitely plan on making trips to see the family in Pampady,” he says.

To know more about Unsung Heroes, visit their Facebook page. 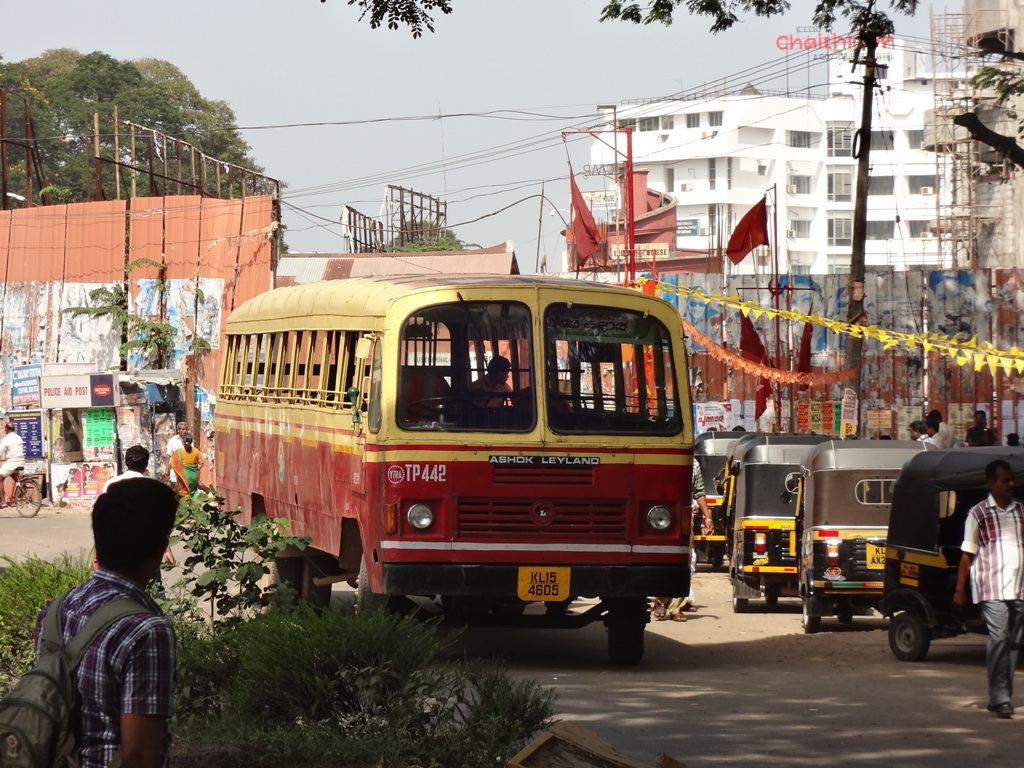