Why Malappuram continues to be a target

The BJP Member of Parliament and former minister, Maneka Gandhi, has done a great disservice to the animals for which she has professed love and admiration for a long time. Now we know that animals are, for her, a game for potential political gains.

Look at the multiple ways in which she has tried to mislead the people on the saga of the poor pachyderm that tragically lost her life in a gruesome accident in Kerala the other day. The she elephant, around 15 years of age and pregnant, had found her way to a village near Mannarkad, close to Silent Valley national park that falls in the Palakkad district, where she fell prey to the booby trap set by the villagers.

This is a case of a serious problem that has been witnessed in many parts of India, where animals and humans face each other as adversaries in a longstanding confrontation for livelihood. The animals have been finding their traditional habitats encroached upon by the humans, who, in turn, complain about the animals raiding their crops and villages.

This is the most significant concern for animal-lovers all over the world: They try to find solutions like protected habitats for animals, incentives for villagers for protecting the animals with support from government agencies and tourism promotion packages that take care of the interests of both animals and humans.  Any sensible animals’ rights campaigner would have focused on these aspects and urged the government agencies to work for lasting solutions to the problems. But not Maneka Gandhi. She found it a convenient tool to drive a wedge between the people on communal grounds. In her tweet on the sad death of the elephant, she wrongly claimed took place in Malappuram district in Kerala.

Mallapuram is know for its intense criminal activity specially with regards to animals. No action has ever been taken against a single poacher or wildlife killer so they keep doing it.
I can only suggest that you call/email and ask for action pic.twitter.com/ii09qmb7xW

The ignorance of the former minister about the geography of the state of Kerala might be pardonable. What is unpardonable is the cynical use of untruths about a section of the people of India, with evident ulterior motives. She is repeating a false propaganda that has been unleashed against the people of Malappuram for a long time, with little success on the ground. The people who inhabit the region have always been careful not to fall a prey to the nefarious campaigns against them from forces across the country.

To be fair to Maneka Gandhi, one should accept that hers is not the first or definitely not the last of this kind of communally charged falsehoods hurled against the people of this region. Decades ago, writing in the now defunct The Illustrated Weekly of India, eminent writer and Trissur native C P Surendran had predicted that by the turn of the century, Malappuram towns would see gun-wielding youngsters on motor bikes roaming about, invoking similar scenes in places like Gurdaspur, in the height of the Khalistan movement in Punjab.

Then in 2008, The Hindu’s Praveen Swami, in a report about the Islamic terror networks in Kerala, wrote about such networks in Malappuram and Kondotty ‘districts’, unmindful of the fact that Kondotty was only a town in Malappuram. The fact is that despite the passing of decades, both Kondotty and Malappuram remain peaceful and people continue to live in harmony.

As a reporter in Malabar for a long time, I remember many such instances. Once, N Kannan, a CPI (M) member in the Kerala Assembly raised a question in the House about the report on Muslim-owned shops in the region refusing to sell the black dhothies donned by Sabarimala devotees. It piqued my interest as a journalist, and when I rang up the MLA for further information on the matter, I was aghast to hear that he had no direct information and the question was raised on hearsay!

That raises the question: Why Malappuram is singled out for such poisonous insinuations? Why do even sober and secular persons fall prey to it?

Simply put, it is a matter of the deep influence of Islamophobia, long in existence in our public life. The district was formed in 1968 during the time of EMS Namboodiripad ministry, when the Indian Union Muslim League (IUML) was also part of it. In fact it was the first government in Kerala that had a Muslim League participation. They had two ministers in it – C H Muhammed Koya and APM Abdullakutty Kurikkal (then after his death, Avukkaderkutty Naha joined the ministry). The Muslim League, at a meeting in Kozhikode some time earlier, had demanded the formation of Malappuram district bringing together parts of the taluks of Ernad, Valluvanad, and Ponnani, for administrative efficiency and development of this backward region in the northern parts of the state.

There were voices of criticism, not only from the Bharatiya Jan Sangh, the forerunner of BJP, and prominent public figures like ‘Kerala Gandhi’ K Kelappan, who were worried about the emergence of a Muslim majority district, disturbed by the memories of the divisive politics played by Muslim League only two decades earlier during the days of the country’s partition.

The government defended its decision on the grounds that for development of backward regions, such decentralised administrative systems were necessary. It also pointed out that in addition to Malappuram, another district named Malanad was also being planned for hill regions. A few years later, two districts were carved out for the hill regions, Idukki and Wayanad (and then came Pathanamthitta also).

But no one found anything wrong about the formation of these districts, except Malappuram. The champions of the anti-Malappuram campaign have defended themselves on the divisive slogans of the Muslim League in the 40s. They asserted the party never had openly abandoned such policies even after independence. This criticism is partially valid. The Muslim League has never formally addressed the question of the validity of Muhammed Ali Jinnah’s two-nation theory in its seven decades of existence in independent India. Nor did it bother to declare a formal and complete break with his legacy at its formation meeting at the Rajaji Hall in Chennai in 1948. As a result, the old wounds of 1947 have often returned to haunt it, questioning its legitimacy and loyalty to the Indian nation.

But even as this remains a theoretical and political question, the people of Malappuram have faced the immense burden of the crimes they have never committed. No one can say that there were gun-toting youngsters on motor bikes on its streets as the eminent writer had predicted, nor can anyone say that its shopkeepers refused to sell the Hindu devotees’ favourite clothes. In fact, the region has always remained a haven for people’s solidarity in times of adversities and peace and cooperation among members of various communities.

Despite all this, the deliberate and motivated campaign running down the people in this part of our country continues, instigated by forces motivated by a lust for power through foul means. Maneka Gandhi and her love for Malappuram’s traumatised animals is no exception. 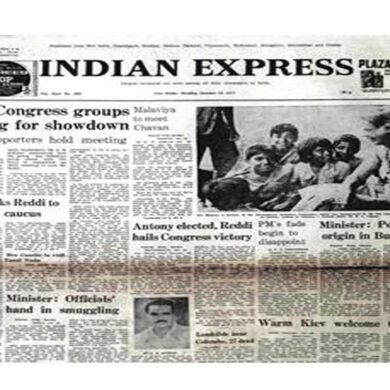 The Story of (New) Indian Express in Kerala