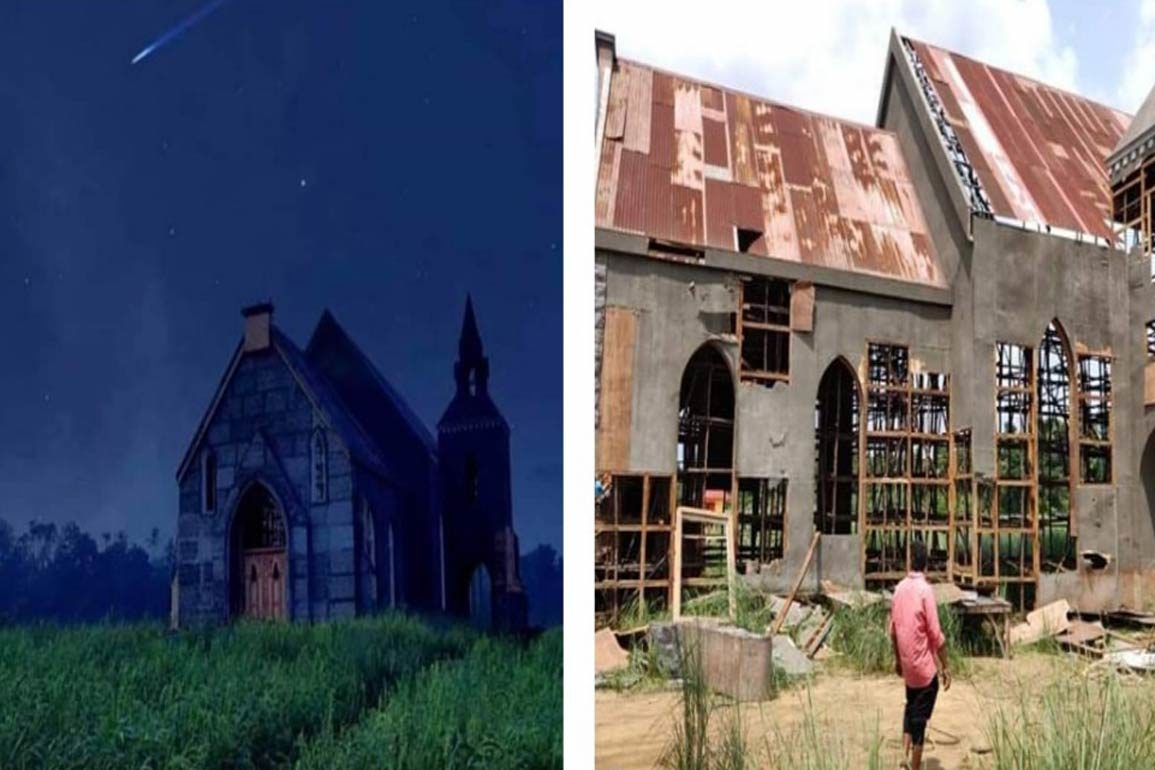 In a shocking incident, the film set of the Tovino Thomas-starrer, Minnal Murali, was destroyed by a right wing group, the Rashtriya Bajrang Dal’s Ernakulam unit, an offshoot of Antarashtriya Hindu Parishad (AHP). A case has been registered in the Perumbavooor police station against the miscreants. What has shocked Kerala is the brazen show of fundamentalism in the state, known for its religious harmony. The Chief Minister, Pinarayi Vijayan, was quick to condemn the incident and said that action will be taken against the miscreants and such vandalism will not be tolerated in Kerala. 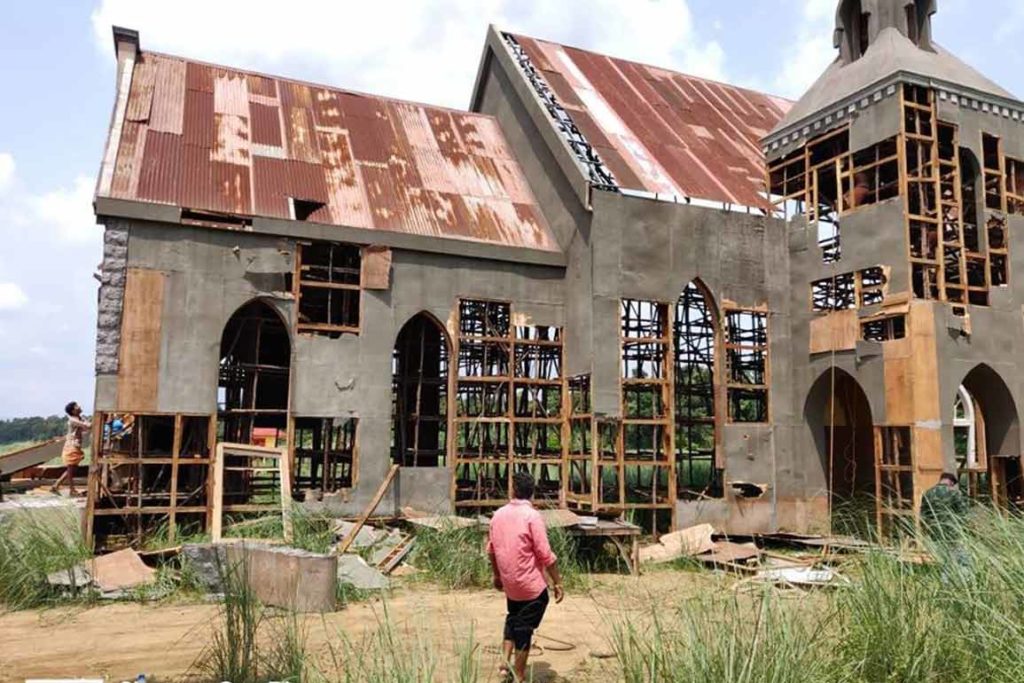 Malayattoor Ratheesh, president of the Rashtriya Bajrang Dal, Ernakulam Unit, who led the attack on the film set, modelled on a church, is an accused in a murder case and is presently out on bail. The film set, which was built for film shooting near the Mahadeva Temple in Kaladi, Ernakulam district seems to have irked the extremists.

According to Kalady SI Stepto John, Ratheesh is an accused in a murder case and is out on bail. “He is a goon and we have now come to know that those who vandalized the film set had earlier approached the filmmakers demanding money. However, we have not received any complaints from them,” John added.

“A case has been slapped on the anti-social elements for illegal gathering, destruction of properties and for stealing valuable materials from the film set. The police is not concerned whether permission has been granted by the local body or not. Regardless of the permission, these miscreants have damaged property and stolen things from the site,” Perumbavoor CI, C Jayakumar, told The Kochi Post.

Palode in a congratulatory post said that his organization had warned the filmmakers not to build a church for a film shoot near the Mahadeva Temple located on the eastern side of the bridge across Kalady River, on MC Road. “We had filed complaints (but no action was taken). It is below our dignity to beg and so we decided to do away with the structure. It is a matter of pride and those who were engaged in the act of destroying the structure have done a service and an ideal act. Kudos to Malayattoor Ratheesh, who is the president of Rashtriya Bajrang Dal’s Ernakulam unit for leading the attack from the front. May the blessings of Mahadeva (idol) be upon you,” the FB post said. 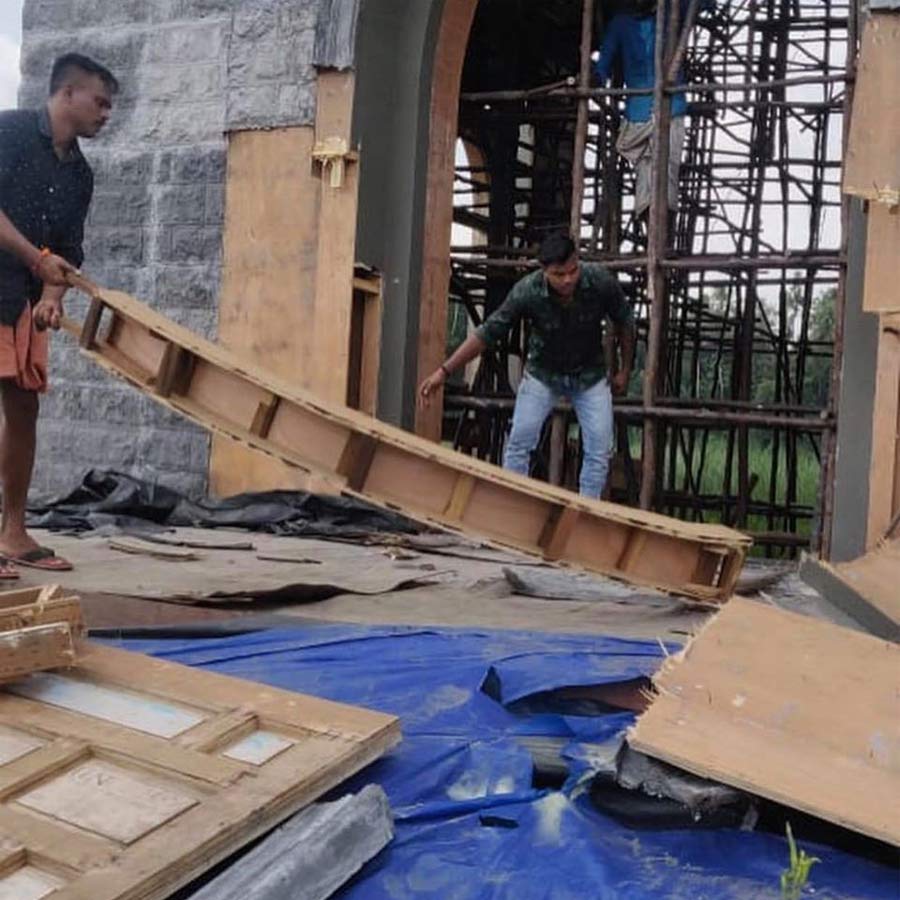 He also said that according to his knowledge the film site was in Okkal Panchayat and in the Perumbavoor police station limit. However, a panchayat member of Kalady Panchayat said that the film set was located on an isle formed after accumulation of sand in the middle of the river. “The entrance of the set belongs to Kalady panchayath and there are portions of film set are also in Okkal panchayat,” she said.

The right wing FB groups have been posting an RTI reply from Okkal Grama Panchayath signed by its secretary Deepa Kumar saying that no permission had been given as per the official records of the civic body for any film shooting or setting up film sets. The RTI reply is dated 08.04.2020, two weeks, before the lockdown started.

The filmmakers have refuted this and said that they had all permission to build the set in the location.
“I have been working for this big budget movie for the past two years. It is with lot of effort our art director and his team set up this church for the shoot. It is also the hard-earned money of the producer. Just as we were about to start filming on this location, the lockdown started. I never thought amidst this pandemic, such an attack on my film set will happen, that too in Kerala,” director of the film Minnal Murali, Basil Joseph said on his FB page. He said that he has got all approval for shoot and for making the film set.
The film industry has been reeling under the Covid-19 induced lockdown unable to release films in the theatres losing crores and this vandalism has shocked the film fraternity.

Actor Tovino Thomas in a Facebook post expressed his anguish and despair. He said: Minnal Murali’s first schedule at Wayanad had been in progress when the set for the second schedule began construction at Kalady. It was carried out by art director Manu Jagad and team, under special instructions by stunt choreographer Vlad Rimburg. For this, we had the rightful permissions from the concerned authorities.And as we were about to start shooting in this set – which was built on a considerable cost, the whole country went into lockdown, following which our shoot was paused, just like all others.It is during this prevailing uncertainty that this contractual set was destroyed by a group of racialists yesterday. The reasons they cite for this unceremonious act are not understood to our senses till now. We’ve heard of movie sets being vandalised by religious fanatics in Northern parts of India. Now, it’s happening to us right here.

The virus of extremists

Meanwhile B Unnikrishan,  film director, on Facebook said that all permission had been given for the shoot and lakhs had been spent on the sets and it was destroyed by fundamentalists. He called it a fundamentalist virus. 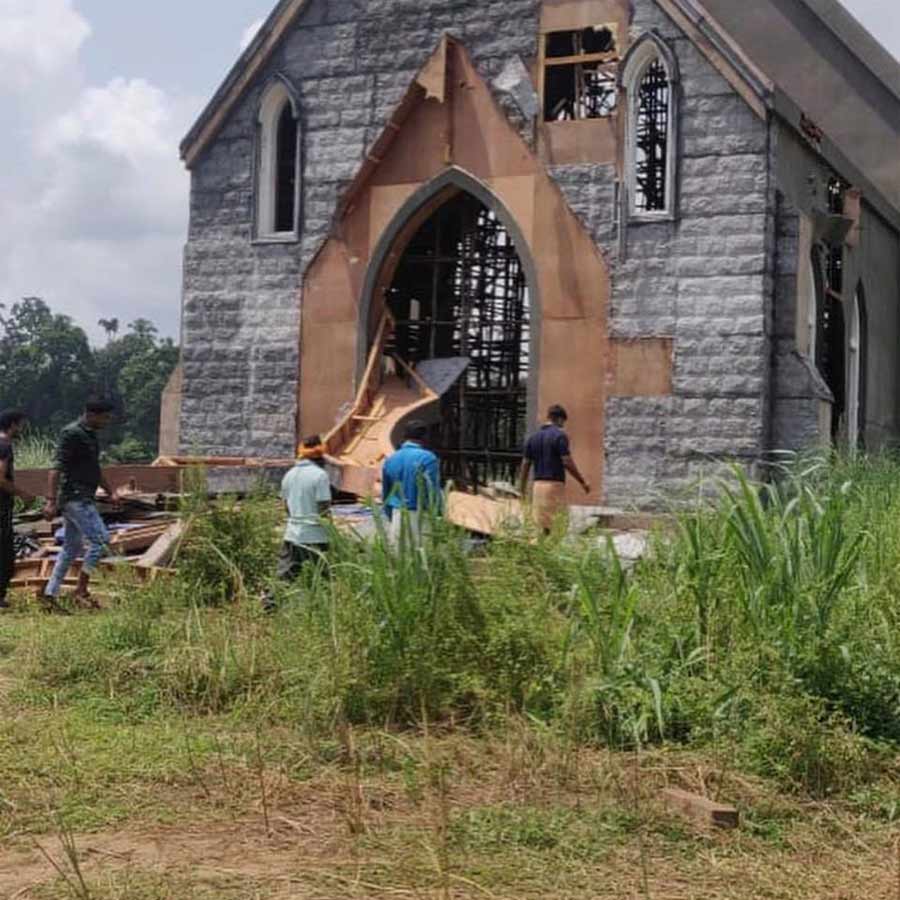 Local people also said that there were talks of Malayattoor Ratheesh giving an ultimatum to the film crew that without paying him money he had demanded, they could not shoot at the location. “Church looked amazing from outside and it was our favourite photo shoot location. It was built for film shooting and will be dismantled after shoot,” a person residing in the locality said.
However, the rightwing groups are campaigning on social media that the set was constructed without permission from the civic bodies concerned and such churches set up for film shooting were not dismantled in different part of the state and they later turned into pilgrimage centres. 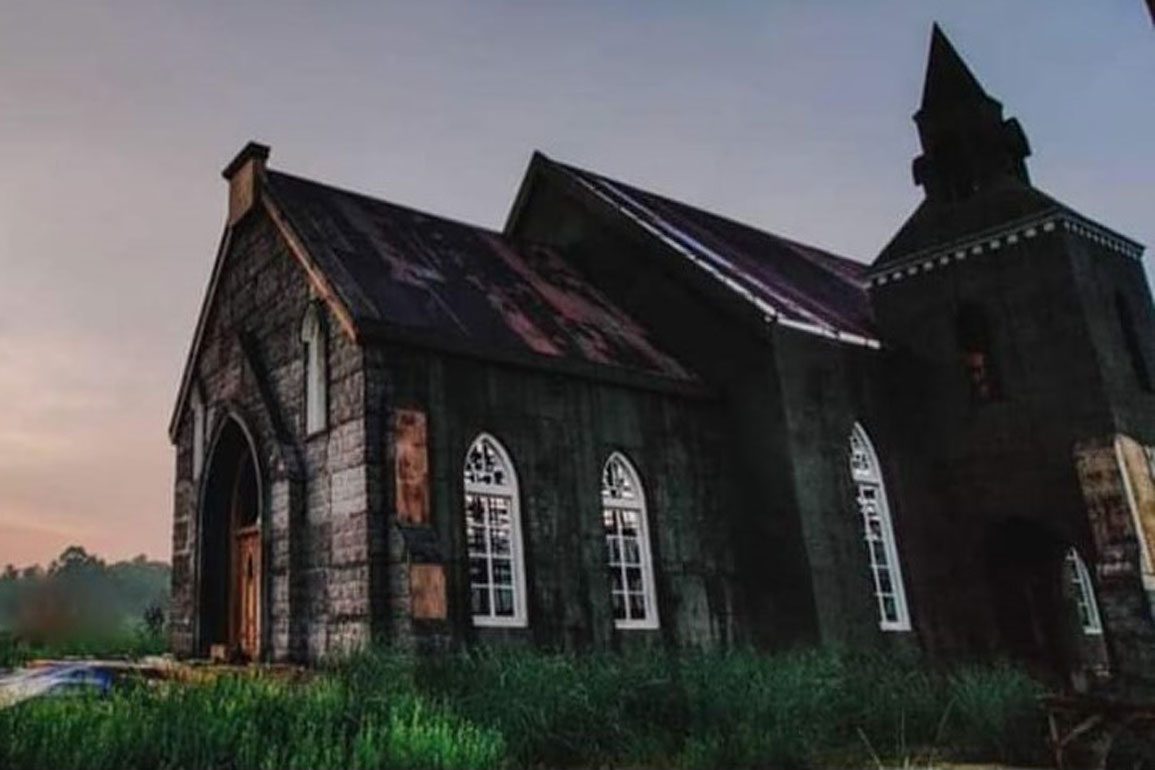 BJP state spokesman, Sandeep Warrier, distanced the Sangh Parivar from the act. He said that the attack had nothing to do with the RSS, the BJP or any Sangh Parivar groups and some anti-social elements had carried out the act of vandalizing the church to get media attention.
AHP was launched by former Vishva Hindu Parishad chief, Praveen Togadia, after he was ousted from VHP due to internal feud three years ago. 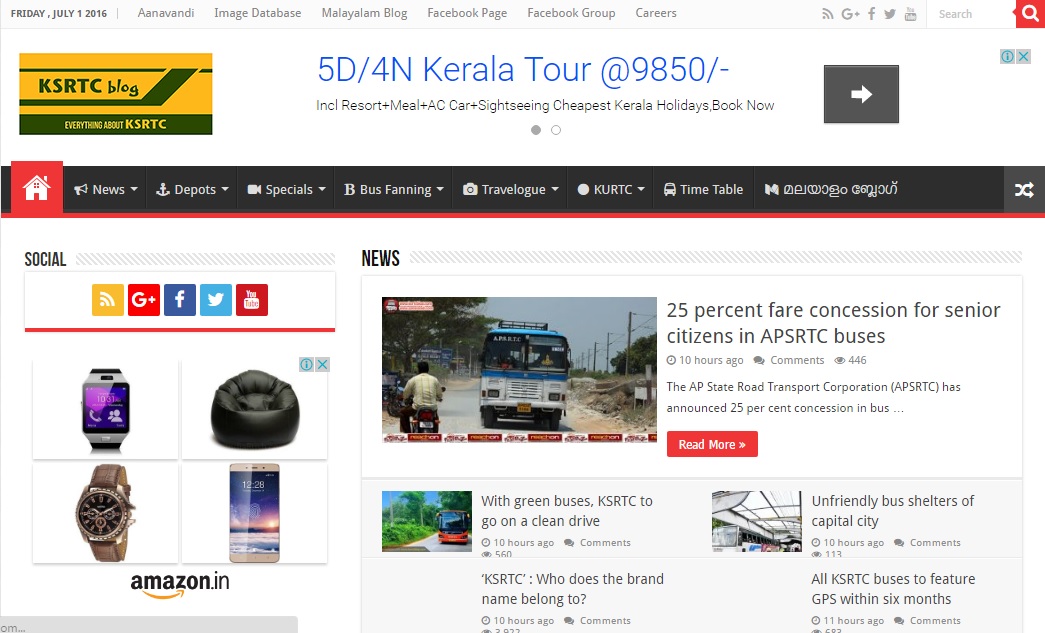