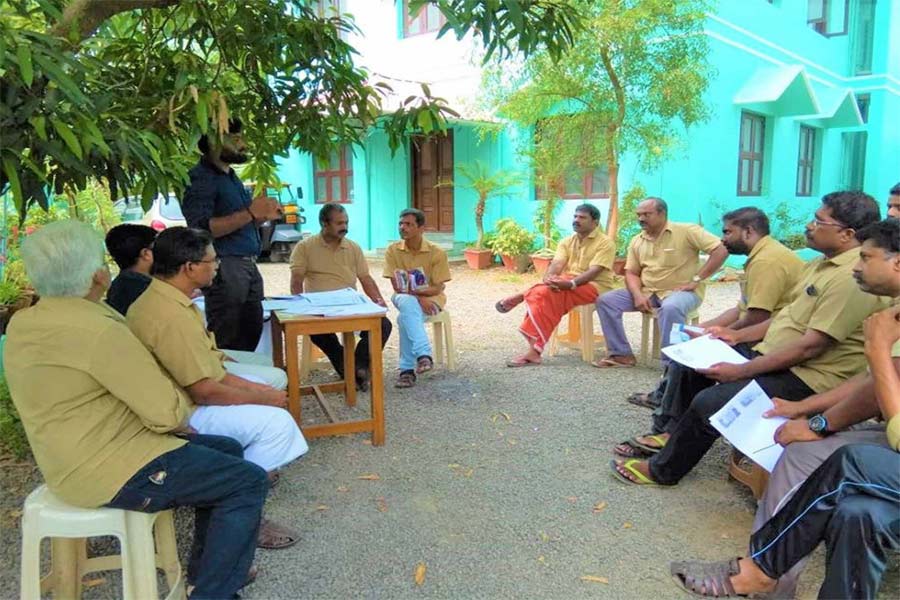 For 20 years, Sarathi has been looking after the needs of autorickshaw drivers in Kerala

The grocery kits are ready. In each, there is one kilo of sugar, wheat, pulses, gram, vegetable oil, and packets of different types of masala. There is no rice since the Kerala State government had already distributed 30 kilos of rice free to those below the poverty line and 15 kilos for those above. Now, these kits are also being distributed free, owing to the coronavirus lockdown, at the autorickshaw stand in the town of Angamaly (40 kms from Kochi). Supervising it is the Sarathi organisation, which celebrated its 20th anniversary on March 11.

Sarathi’s main aim is to look after the needs of taxi and autorickshaw drivers. “We felt that they were a segment that did not get much respect from society,” says Dr Fr Sebastian Thekkanath, the state director of the organisation, which is under the aegis of the Justice, Peace and Development Commission of the Kerala Catholic Bishops’ Council.

Very early in his interactions Fr. Sebastian saw that many of the drivers had taken loans, for emergency expenses, from private money lenders at high rates of interest. So, he came up with a suggestion. Members of each auto stand should open a bank account. And they should strive to put Rs 300 every week in the account. That would work out to Rs 1200 a month or Rs. 14,400 a year. Money could be withdrawn to a maximum of 95 per cent of the deposited amount. “This way, they did not have to pay high-interest rates,” said Fr. Sebastian.

Now and then Sarathi also conducts motivational classes to improve the character and personality of the drivers.

The organisation’s reputation has been spreading. There are 28,457 members across 14 districts. They belong to all castes and religions. “Everybody is welcome,” says Fr Sebastian.

And the members are happy. Nawas MN has been president of the Sarathi unit at the Lisie Hospital stand at Kochi for the past three years. Out of 42 auto drivers, 34 are members of Sarathi. “I used to work in a union, and because of political opposition no work used to get done for the members,” he said. “But in Sarathi we are all united.”

The drivers put money into a common bank deposit. And two years ago, they bought an autorickshaw costing Rs 1.6 lakh for their colleague Prafulla Chandran. He is repaying in monthly installments. The Lisie unit also pays the motor and medical insurance of its members. They have also donated Rs 1 lakh to charity. For a poor lady who has to undergo regular kidney dialysis, the unit has paid her bills.

However, the biggest gain for Nawas was that he has been able to change his behaviour towards customers. “It is only after I joined Sarathi I realised that we have a poor image in society,” he says.

Many customers will agree. Whenever PR professional Susan Thomas, 35, travels in an auto in Kochi, she ends up in an argument over the fare with the driver. “They are always overcharging,” she says, a flash of anger erupting in her eyes. “None of them follow the meter. They are so rude.”

Fr Sebastian admits that many drivers are boorish and domineering and overcharge a lot. But he says there are reasons for this. “Let’s take a stand where there are 40 autos standing one behind the other,” he says. “By the time the 40th auto gets a passenger, two hours have passed. But the 40th customer may want to travel for two kms. So, the driver can only charge the minimum rate of Rs 25. Sometimes, they have four trips in a row of minimum charges. That is Rs 100 only, till about 2 p.m.”

So when they get a trip which has a fare of Rs 100, they will immediately charge Rs 150, to make up for the poor income earlier. However, this will anger the customer. “I don’t condone their behaviour,” says Fr Sebastian. “It is cheating. But they feel compelled to ask for a higher fare.”

Many of them have taken bank loans to buy the vehicle. So, there is the monthly EMIs, household, educational and medical expenses. There are additional payments for auto repairs, fuel and their daily food bills, as many live outside the towns, so they cannot go home for lunch.

“In Sarathi, we hold classes where we tell them it is important to behave courteously with passengers and to be honest in their dealings,” says Fr. Sebastian.

Since many of the drivers have to wait a long time at the stand, Fr Sebastian tells the auto drivers to use the time constructively. Drivers are encouraged to keep the area neat and clean, by using a broom, render assistance to old people who are about to cross the road or read books and newspapers. “We also encourage the drivers to collect plastic packets in the area and take it to recycling plants,” says Fr. Sebastian. “This could be their contribution to a cleaner environment.”

Unfortunately, many go through a tough time because of a polluted environment. “Most drivers suffer from dust allergy because they are always on the road,” says Fr. Sebastian. “Their lungs are damaged by excessive pollution. Many have shoulder and back problems because of the constant use of the gear and leg pedals.” Recently, a 46-year-old had to stop driving his vehicle because of excessive back pain. He had been a driver for over 20 years. On his doctor’s advice, he has left the profession.

Owing to their low status in society, family members are not proud of their bread-winner. But during annual meets, where families are invited, Sarathi shows the important contributions that a driver makes.

“If there is an accident, it is always an autorickshaw which is used to transport the injured to the hospital,” says Fr. Sebastian. “Drivers have saved so many lives. And when you cannot find a location, most people ask the local autorickshaw driver for directions. And when they are standing in a particular area, they can keep a watch on unusual movements of people in the locality.”