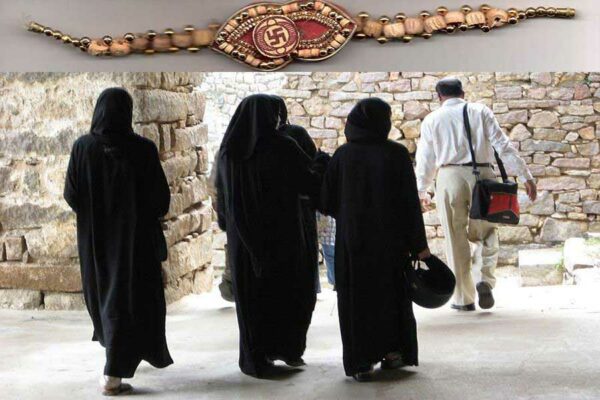 Rakhi and Niqab as Visual Markers of Gendered Responsibility

The rakhi, the amulet thread tied by sisters ritually on brothers during rakshabandhan, is seen in Kerala as a cultural import by the right-wing. And the niqab, the Islamic dress that covers the face of the woman, is also seen as a reprehensive medieval Islamic tradition foisted upon tropical Kerala. Both the niqab and the rakhi have been gaining popularity in Kerala recently. The Muslim Educational Society (MES), an organization with progressive claims, has recently outlawed the niqab in its campuses in Kerala.

While the rakhi tradition dates itself back to the early modern period, it bears reference to the safety and protection of Hindu women from marauders. The same applies to the niqab in the Muslim context, in their perception of the majority community. The gendered nature of communal animosity taints even seemingly innocuous religious practices in the contemporary context. It arises out of their lack of trust in the relationship between these two communities. The rakhi, like the sindur, operates as a visual cue, but directed at a different religious community. The niqab, also does the same.

In Kerala, a harmonious space with little history of the communal violence and mayhem that the northern parts of India have been witness to in the recent past, the wearing and visibility of such markers of religious mistrust and animosity often invites consternation. But the proliferation of these two indices of gendered mistrust occurs within a wider tectonic shift, whereby, the religiosity in the mainstream society is making its footprints. The Malabar rebellion of 1921 is often cited as an aberration in the otherwise secular fabric of Kerala society. But even this has been framed as a rebellion against the feudal system by scholars such as K N Panikkar.