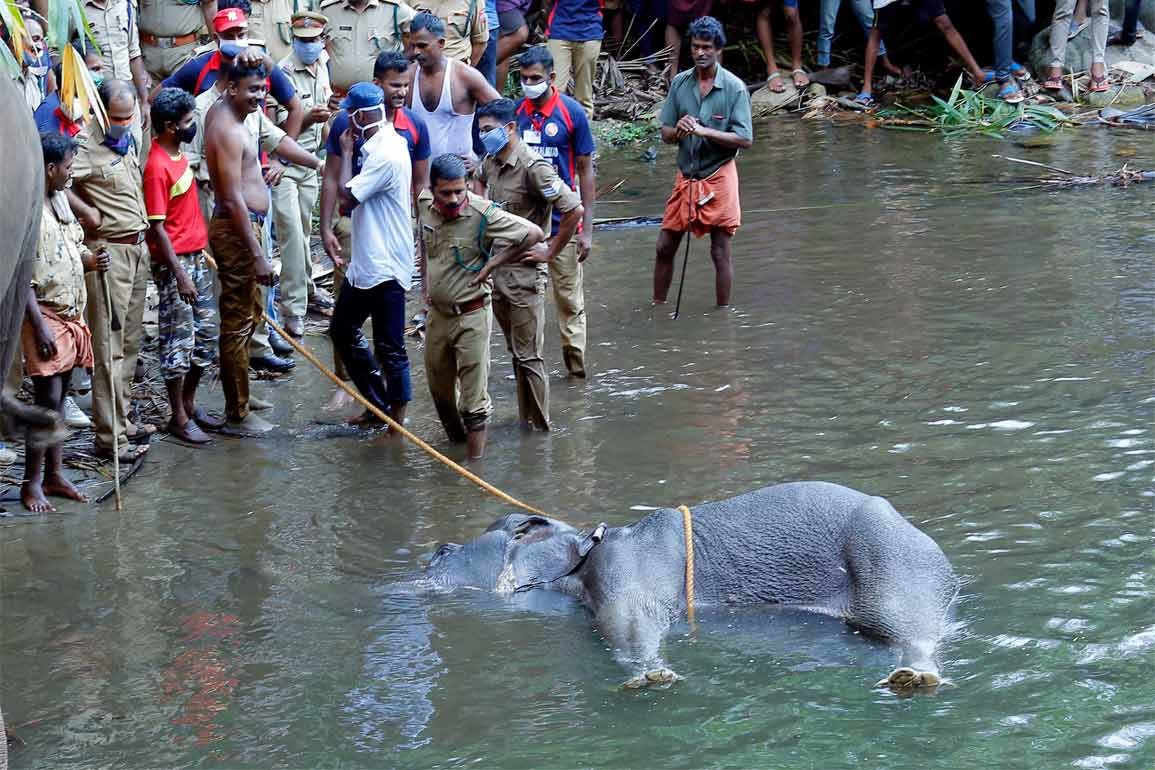 Death of an elephant: A grim message on World Environment Day

On World Environment Day, the gruesome death of a pregnant wild elephant at Ambalappara near Mannarkkad in Palakkad district hogs the headlines internationally. The outrage over the death of the elephant on May 27 after it ate a pineapple stuffed with a powerful cracker, continued on social media platforms and found its way into the international media including the BBC. What further fueled the outrage was that the 15-year-old cow elephant had a one-month old foetus in her womb.

According to the forest officials in Mannarkkad range, the injured elephant was first spotted in the buffer region between the vast plantations and Silent Valley Reserve Forest on May 23 and on May 25, the elephant was again spotted in the river at Ambalappara near Thiruvizhamkunnu. She had immersed herself in the water to get relief from the intolerable pain from the severe injuries inflicted to her mouth cavity. Besides the pain, the elephant had been unable to eat anything due to the injury to its mouth cavity and jaw.

The pachyderm, which was completely exhausted, died on May 27 due to asphyxia (as per postmortem report) when Forest officials were about to begin rescue operations with the help of specially trained Kumki elephants to pull the animal out of the river to give her medical treatment.

The elephant’s entire set of teeth and most of its tongue were damaged in the explosion after it bit the cracker. The cracker was apparently placed in a fruit in one of the plantations in the region with the intention to scare or kill wild boars coming into the area.

The incident got wide media attention when a Forest section officer wrote a touching Facebook post about his experience of handling the injured elephant and attending the postmortem. This was soon picked up by the media.

Superintendent of Police in Palakkad, G Siva Vikram, who visited Ambalappara on Thursday citing the postmortem report said that the dead elephant had suffered the blast injury two weeks ago. The Forest department had registered a case invoking sections of Wild Life Protection Act over the incident.

The incident took a political and communal turn on Thursday with the BJP leader and former union minister, Maneka Gandhi, known for her pro-animal views tweeted that the incident occurred in Malappuram (Muslim dominated) district in Kerala and Rahul Gandhi who is an MP from Kerala needs to respond to incidents of atrocities and ‘murder’ of the elephant.

Her tweet said: “Malappuram is known for its intense criminal activity specially  with regard to animals. No action has ever been taken against a single poacher or wildlife killer so they keep doing it. I can only suggest that you call/email and ask for action,”

She had also posted along with her tweet an email she had sent to Kerala State Forest Minister, K Raju, citing cruelty meted out to several other captive elephants in Kerala. She told a national news channel that the State Forest Minister, Forest secretary and Chief Wild Life Warden in Kerala had no right to remain in the position in light of the incident. She criticized the permission given to shoot wild boars destroying plants and produce in farm lands and plantations lying adjacent to forests in Kerala. She told a Malayalam news channel that she had mentioned Malappuram in her tweet as she got the information from forest officials.

In his daily press briefing on Thursday evening, Chief Minister Pinarayi Vijayan responded to Maneka Gandhi that such attempts to defame Kerala which had done exceeding well containing Covid -19 would not succeed. “Both Police and Forest Department are investigating the incident and culprits will be brought to justice,” he added.

Speaking to The Kochi Post, Mannakkad Forest Range Officer, Ashique Ali, said that the Forest department conducted search operations in plantation areas and in the nearby forests to locate the place where the blast that caused injury to the dead elephant took place. “We are yet to locate the area. There is a possibility that the crackers (Panni Padakkam which blasts if pressure is exerted) are being kept in any of the rubber, banana or other plantations in the area. To use such crackers to kill wild animals is illegal,” he added. Though illegal, using crackers to scare and kill wild boars is a common practice in plantations across Kerala where man-animal conflict exists.

The range officer also said that for shooting wild boars there was a procedure in place and the committee with farmers/planters and forest officials as members must first approve the request to kill the boar before the farmer can kill it.

Mannarkkad SI T K Ramachandran said that Forest department had taken some suspects in the case into questioning and cops were also investigating considering the possibility of a cracker being placed in the any of the plantations. A case has also been registered by Mannarkkad police for atrocities against animals, the SI added.

According to the Forest officials there are vast plantations in both Palakkad and Malappuram and the exact location of where the blast took place in this border area of both the districts is yet to be ascertained. “The place where the elephant was spotted was in Ambalappara in Palakkad district,” they said. The Forest department registered the case on May 28 and the Police on June 3.

Half a lakh reward for informers

A pro-animal group based in Hyderabad, Humane Society International/India (HSI), has come up with an offer to given a cash reward of Rs 50,000 for identification leading to arrest and conviction of accused. Anyone with information about this case is asked to call +917674922044 or email [email protected], Meenal Rajapet, functionaries of the organization said.

“Conflict with wild animals including wild boars is not new and needs systemic changes in wildlife management that can address this meaningfully. However, crop loss caused by wild animals in conflict is no justification for community members taking law into their hands and seeking to maim or kill animals in question. Incidents like this stress upon the need to improve the government systems of ex-gratia payment and the need for crop insurance schemes that will safeguard the interest of communities while not compromising on the welfare of animals,” Sumanth Bindu Madhav, campaign manager for wildlife at HSI said.

He further said that his organization would encourage anyone who knew anything about the person who did this to report to them. The name of the informer would not be anonymous if requested. HSI truly hopes the culprit in this case was apprehended so that it sends a strong message to the community, he added.

Meanwhile, general secretary of Thrissur-based organization Heritage Animal Task Force said that since 1997, the year he started keeping records of  cruelty to elephants, as many as 25 incidents had in occurred in Kerala in which wild elephants died after crackers exploded inside their mouths.

“As many as 29 have been shot dead and 72 have died due to electrocution. In all such cases, the Forest department did not take any stringent action by charging or arresting the offenders,” he noted.

Update: An arrest has been registered in the case. The arrested man has been identified as P Wilson, who is an employee of an estate that grows cash crops. 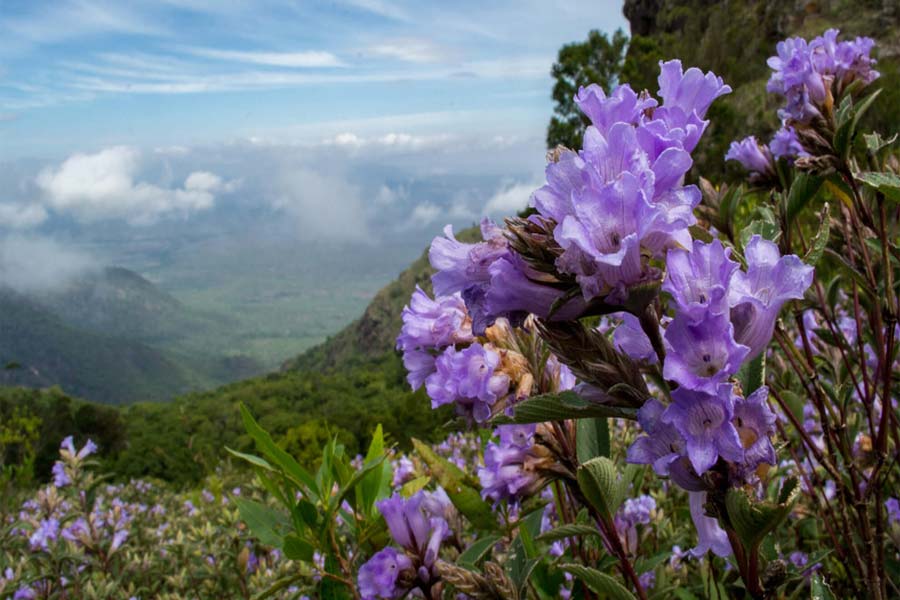 Awaiting A Home For The Neelakurinjis