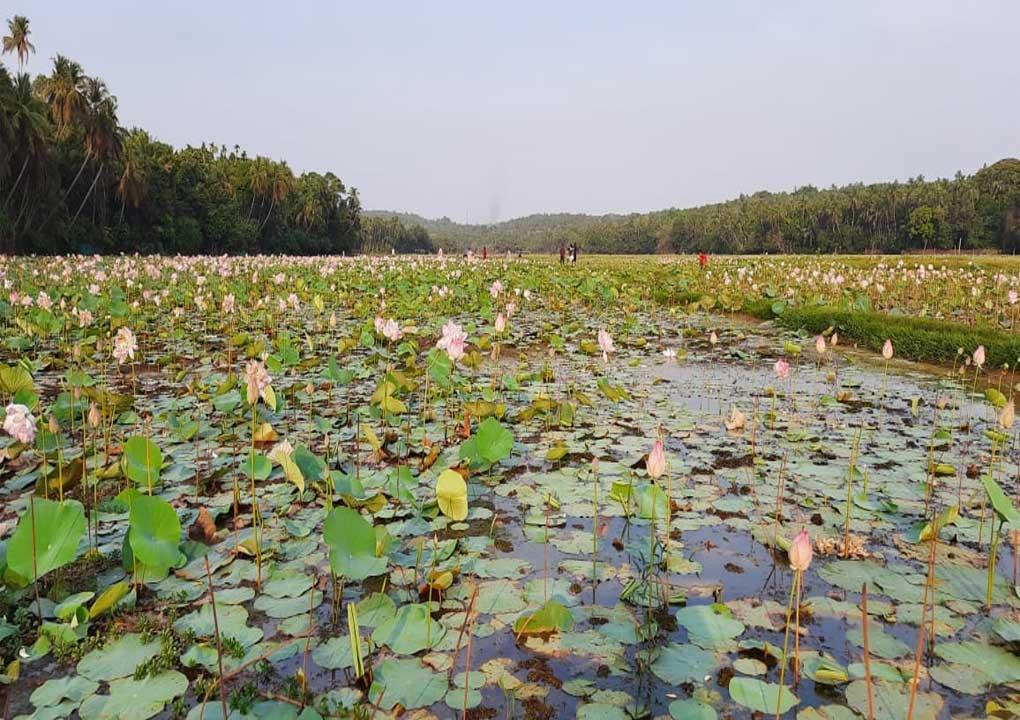 It has been only fifteen years since Karakkadan Abdu at Thirunavaya in Malappuram district shifted from paddy cultivation to lotus farming. The time when he took up that decision, the price for one lotus flower sold by a cultivator was Rs 8 during the peak seasons. Motivated by this, he invested a pretty good amount in his paddy field to convert it into a lotus field. The current lockdown following the COVID outbreak has cast a shadow over his dreams. The flowers which bloomed in abundance this year have been rendered waste.

“I cultivate flowers in an area of nearly 20 acre. I was attracted to lotus cultivation after finding that it would provide a steady income. My calculation was vindicated until 2018. That year, I had to face the first setback owing to the flood. It repeated in 2019 and now in 2020, we don’t even hope to get any income out of the lotus cultivation,” he lamented.

The vast lotus fields have been the profile of Thirunavaya, a small town near Kuttippuram in Malappuram district. This place also has a historical significance as it hosted the once famous ‘Mamankam’. A natural wetland spanning more than 1000 acres is part of the identity of Thirunavaya and the nearby Kuttippuram panchayat. It is in these wetlands the lotus is cultivated. There are around 40 parties doing lotus farming in this locality. 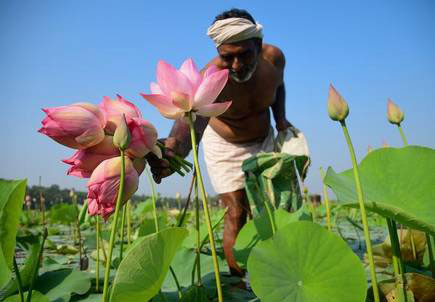 “Actually this is the peak season. Lotus flowers bloom in bulk during the period between February-May. We used to collect an average of 6000 flowers a day. We were really happy with this business. It was my father who began this. Now my brother and I are also into it. In the last couple of years, we had suffered losses due to heavy rains. This time, it is the epidemic. The cultivators have started to think about other options,” said Chakkaliparambil Musthafa, who cultivates flowers in a vast area around 90 acre.

The land owners in the locality lease their land to the cultivators. Each cultivator employs some farm hands to assist them in farming. There are more than 150 families, including the laborers, in Thirunavaya and Kuttippuram who survive on the money they make from the lotus cultivation. “Since marriages and other functions are not taking place, there were no demands for the flowers this season. Besides, our main clientele are temples across the state and even outside. But since temples are closed now, no one is approaching us for flowers. Flowers of lakhs of rupees have gone wasted now,” said Kunjippa, brother of Musthafa. Kunjippa cultivates in an area of more than 60 acre.

The major cultivation is happening in the wetlands at Valiya Parappoor, Cheriya Parappoor, Kodakkalthazham, Vavoorkayal, Pallattukayal, Thiruthithazham, Chaliyarpadam and Veeranchira. “Like any other crop, lotus requires continuous care. We need to pluck the roots after each season and also have to prepare the land for the next round of cultivation with the help of a tractor. The mud is required to be infused with fertilizers. All these activities need great human effort and labour. The people who have long been toiling in the fields are now hopeless. We are looking forward to the Government for support,” said Musthafa.

It was only a few months back the Government included lotus cultivation in the flower cultivation category. Bank officials had visited the place a year before that and they had assured the cultivators the availability of loans from various banks.

The lotus fields of Thirunavaya symbolise religious harmony as the majority of cultivators hail from the Muslim community and their main customers are Hindu temples in and around the state. Musthafa’s father Kunjimohammad Haji was one among the pioneers of lotus cultivation in the region. “My father got a lotus root from someone. He and his friend Karakkadan Muhammed alias Koyakkutty planted it in the wetland of Valiya Parappoor and that was the beginning of the lotus farming here which is now spans 2000 acre,” said Musthafa.

Flowers from the fields of Thirunavaya are sent to adorn the idols of almost all the temples in Kerala, including the famous Guruvayurappan temple in Thrissur district, Sabarimala in Pathanamthitta, Kadambuzha in Malappuram and Kollur Mukambika in Karnataka. Lotus garland is very important for the chief deity ‘Navamukundan’ (Maha Vishnu) of Thirunavaya Navamukunda temple. In 2002 when Gujarat riot shook the nation, a non-profit organisation ‘Re Echo’ had filmed a documentary based on the lotus fields of Thirunavaya signifying its symbolism for religious harmony.

Since the cultivators had begun realising that they would never survive by solely depending on the demand from the temple authorities and puja stores in the years to come, they have been demanding that the area be developed as a lotus tourism hub. “We have been raising this demand for several years. To help lotus farmers reach out to the larger world, we had conducted a ‘Thamara mela’ (lotus festival) in 2016. A giant floral carpet made with a whopping 12,300 lotus flowers to mark the festivities in 2015. Around 20 farmers in the region had supplied flowers to us that time,” said Ummer Chirakkal who is among the advisory committee members of Re Echo.

The vast wetlands where lotus is cultivated also houses a great number of fish varieties. “When we began mulling about the scope of tourism around lotus fields, we had also planned to incorporate the fish food varieties – just like how it is being done at the backwaters of Kuttanad. Stalls and small restaurants can be set up where tasty dishes made of wetland fish varieties can be prepared and served fresh,” he added. A suspension bridge from Edakkulam to Maniankadu over the lotus fields, connecting Thirunavaya and Kuttippuram panchayats, is also planned.

“The proposals were handed over to various authorities during the lotus fest. It is high time the activities are sped up to make our long-cherished dream come true. Besides, there are so many value-added products which can be made out of lotus; its flowers and buds can be used to make tasty drinks and squashes; the root and the stem have medicinal value; lotus chips are also famous. More studies should be commissioned on the various uses of lotus plants and, with adequate Government support, the region can be developed as a tourist destination in Kerala. More employment can also be generated,” said M K Satheesh Babu of Re Echo.

Geographical Indication for Thirunavaya lotus is also highly demanded by the cultivators and Re Echo. “This will greatly help the cultivation, tourism and also when it comes to value-added products. Just like Malabar pepper, Alleppey Green cardamom and Ambalapuzha palpayasam, Thirunavaya lotus should also be given the GI tag,” said Ummer.

The lotus cultivation has also made the region suitable for bird breeding. Apart from many Indian and local varieties, rare migratory birds like Asian Open Bill are found here. “The Asian Open Bill has actually started breeding in these fields. This is the only place in Kerala where this particular bird variety is found,” said Sree Nila Mahesh, a student of zoology who has been studying about Asian Open Bill for the past few years. She is also planning to do her Doctoral studies in this topic.

Bird varieties on the verge of extinction like Oriental Darter are also found here. Purple Heron, which is also rare in Kerala, is found here. Indian Pitta, another rare bird variety, is also noticed to be breeding in the nearby locality called Bandar Kadavu. At least five varieties of sea gulls are also found in these fields. This is the only place in kerala where one can spot at least five varieties of sea gulls at a time. “It is because of the abundance of grass plants surrounding the lotus fields that creates a favourable condition for bird breeding devoid of any human distraction,” said Sree Nila, adding that a bird sanctuary can also be proposed as part of tourism development in the region. 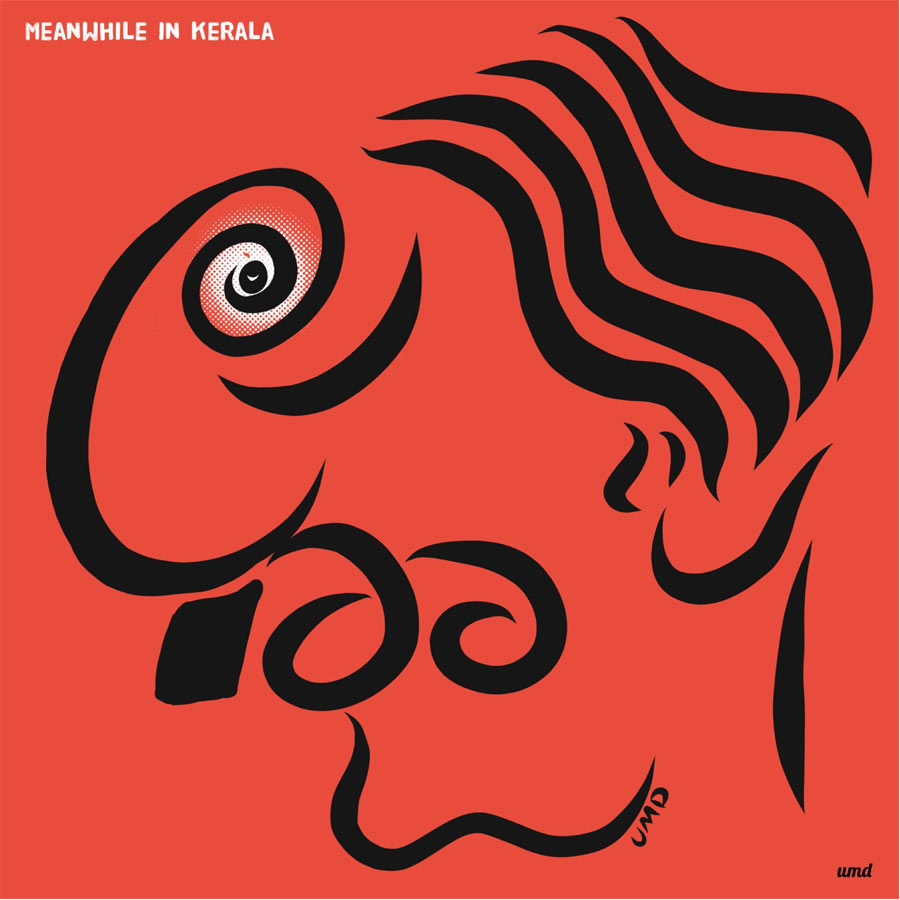