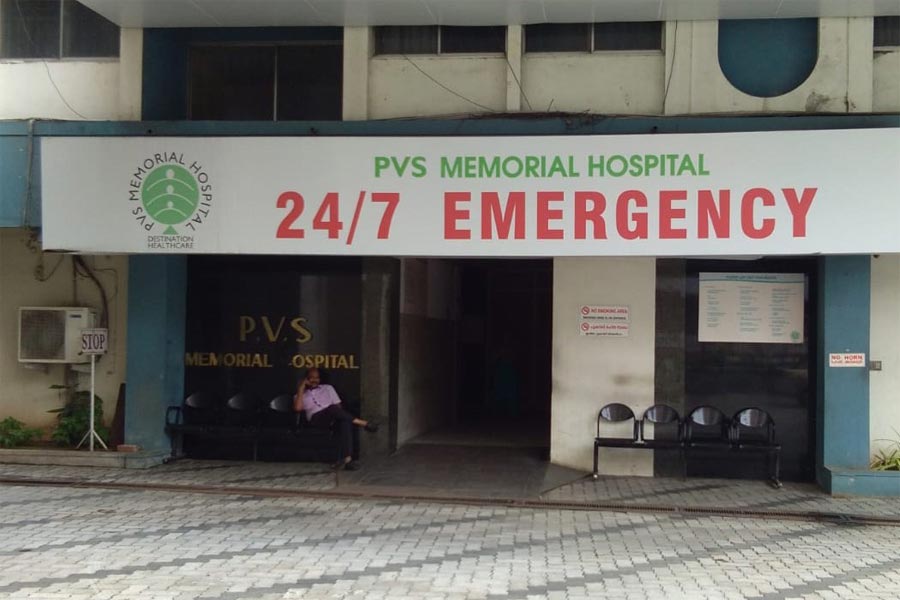 “Patients still keep coming,” Sheeja Thomas said pointing at the two women walking into the compound of the PVS Memorial Hospital in Kochi. Sheeja had joined the hospital as a clerk 11 years ago. But for the past three months, though, she has been jobless and is a regular at the sit-in protest in front of the hospital, which is carried out in two shifts from 8 am to 6 pm.

Many others like Sheeja are opposing the total shutdown of the 200-plus bed hospital on 10 May 2019. The 500 medical and non-medical staff members at the hospital had been completely clueless about the financial dark hole they were being sucked into.

About a year ago in early 2018, the Kochi branch staff had started facing delays in receiving their salaries. “Whenever we approached the management, we were paid something like Rs 5,000. Then we would be paid once in two months,” says Lisamma, who was a lab technician at the hospital for the past 24 years.

From 2016 onwards, the hospital has not made any deposits into the Employees’ Provident Fund (EPF) despite making deductions from salaries, a senior doctor said. And, for the past couple of months, the staff’s share too wasn’t remitted. Several doctors and other staff members pointed out how they were struggling to submit I-T declaration this year after the hospital withheld their Form 16.

The staff worked until the hospital was locked down on May 10, after which they were asked to stay away.

On May 12, Indian Medical Association (IMA) Kochi president Junaid Rahman and secretary Haneesh Marisa, United Nurses Association vice-president Haris Manalumpara, consultant gastroenterologists doctors Mathew Philip—who joined the hospital in 1992—and Prakash Zacharias—attached to the hospital for close to 15 years—and some staff representatives of the PVS hospital met District Labour Officer (Enforcement) Biju V B to discuss a solution. It was decided at the meeting that the first installment would be disbursed on 24 May 2019 and the second on June 20. However, only a few received payment on the said date – that too only 50%. The deadline for the payment all dues, arrears till 30 April 2019 and the bonus for 2018 was 20 August 2019.

The protesting staff met the Joint Labour Commssioner on 20 August. But the management failed to turn up, nor were their dues paid.

The hospital used to see an average footfall of close to 1,500 patients a day. As PVS was the most sought after for gastroenterology, the department alone received about 600 patients per day including referrals from other doctors far and wide. “PVS has the latest equipment; the management was also very cooperative in securing them,” said medical director Dr Mathew.

Since May 1, the staff were disallowed from using the premises. Some members of the staff claimed that they have had to defy the management to allow patients to meet the doctors. According to Alphonsa Melvin, the operation theatre in charge who has been with the hospital for 24 years, Dr Mathew was blocked from meeting out-patients. The staff then arranged a makeshift OP so that he could attend to the patients. The staff had to carry a patient to the seventh floor for a gastro-procedure as the elevator was shut down, as the hospital authorities had even turned off the power supply, said Annie Christina, who was the out-patient coordinator at gastroenterology .

In 1958, a freedom fighter, P V Sami, founded the Kerala Transport Company (KTC). Headquartered in Calicut, KTC later diversified into several areas such as healthcare, property development, finance, printing & publishing, and film production. KTC entered the healthcare sector in 1974 with the establishment of a 10-bed clinic in Kozhikode. The hospital became a pioneer in superspeciality healthcare in north Kerala and by 90s had grown into a 300-bed hospital. The PVS Memorial Hospital, named after the founder, was established in 1992 in Kochi as part of the expansion drive.

The KTC website claims that the family is among the top ten business families in Kerala, with a group turnover of over Rs. 400 crores. KTC is also a major stakeholder in the Mathrubhumi Printing and Publishing Co. Ltd., publishers of the leading Malayalam newspaper Mathrubhumi.

“The media has been ignoring us. All of them came here and spoke to us. Malayalam television channels, too, came. But, the news disappeared into thin air,” Melvin said.

Staff and doctors rued the Malayalam media ignoring their plight. Among the major newspapers with local editions, only The Hindu and The New Indian Express gave updated coverage on the issue. The mainstream Malayalam media–print and broadcast–pretended to look away.

“Why didn’t our struggle and protest make news? Why there were no prime time debate on our issue?”, many members of the protesting staff asked. “Among the Malayalam media, only Deshabhimani [the CPI (M) organ] gave coverage of our protest,” said Dr Prakash.

Baffled by the lack of coverage, Dr Mathew wondered: “Shouldn’t the media be covering this issue?” According to him, timely intervention could have saved the hospital.

When Baby Memorial Hospital in Kozhikode and Lakeshore Hospital in Kochi had made takeover offers, the PVS management initially showed enthusiasm, but eventually backed out, the employees said.

Dr Mathew mentioned that each time he intervened on behalf of the staff regarding the salary crisis, he was met with “yes doctor, there is a financial crisis, which will be sorted soon; everything will be fine soon.”

After January, some of the doctors began quitting PVS. By the end of April, the doctors, who stayed back, issued a final notice to the management stating that the status quo was unacceptable and urgent action was required.

On May 1, the staff and the doctors protested by forming a human chain in front of the hospital. The doctors claimed that their salaries were pending for more than a year. There was no response from the management represented by P V Mini. They had stopped coming to the hospital, a protesting staff member said.

On May 10, the doctors received a letter, dated May 5, that claimed that their resignations had been accepted. “We had not even submitted our resignation,” said Dr Prakash.

PVS is also an accredited training centre of the Society of Gastrointestinal Endoscopy of India. The gastroenterology department serves as research and training centre for gastroenterology practitioners from around the world. “It’s unfortunate that we had to send the students to other centres after the hospital closed down. These DNB students had sought us out,” said Dr Mathew. “The hospital used to take in two medical practitioners each year for a three-year course. “Last December, we had a student from Iraq.”

Despite the trouble they are facing, the staff members have only praise for P V Mini, which is why they never expected the management to leave them in the lurch. Mini is the granddaughter of KTC founder P V Sami.

“Madam [P V Mini] attended my daughter’s wedding,” said Rukmini C K, stenographer and ward secretary, who joined the hospital in 1993. In her mid-fifties now, Rukmini will find it difficult to find another job. “Who will give me a job now?,” she said, trying to fight back her tears.

Most non-medical staff have been working for several years, with some spending most of their lives and careers in the hospital. “What will we do? Will we get another job?” was a common refrain across many staffers.

Cherthala-resident Annamma P G, who joined 23 years ago, was the in charge of histopathology. Housekeeping staff Byju K R has been with PVS for 17 years. Along with Annamma and Rukmini, she has been protesting in front of the hospital everyday.

With no Experience Certificate, the younger members of the protesting staff said they found it difficult to find jobs. And at the interviews, some of them were being ridiculed with: “will you organize strikes here?”

Doctors Prakash and Mathew said that the local politicians had heard them patiently and that T P Ramakrishnan, the Labour Minister of Kerala, was quite cooperative.

But, the staff is upset about the government’s inaction. “Isn’t the state being ruled by a party of the working class?”, asked a senior staff member.

The staff maintained the working environment was favourable and that they hardly faced the pressures reminiscent of other super-specialty hospitals in the city. This was also the major reason that attrition was very low and most staff and doctors have been with the hospital since the launch.

The skeleton management staff at the hospital, which has been working regularly, agreed that there were some salary-related issues. One of them said: “We don’t know anything more. We are not authorized to talk to the media.”

Dr Mathew, who has been with the hospital since the beginning, on being reminded that he had devoted a major share of his life and career to the hospital, laughed softly.“I wanted to die in PVS.” 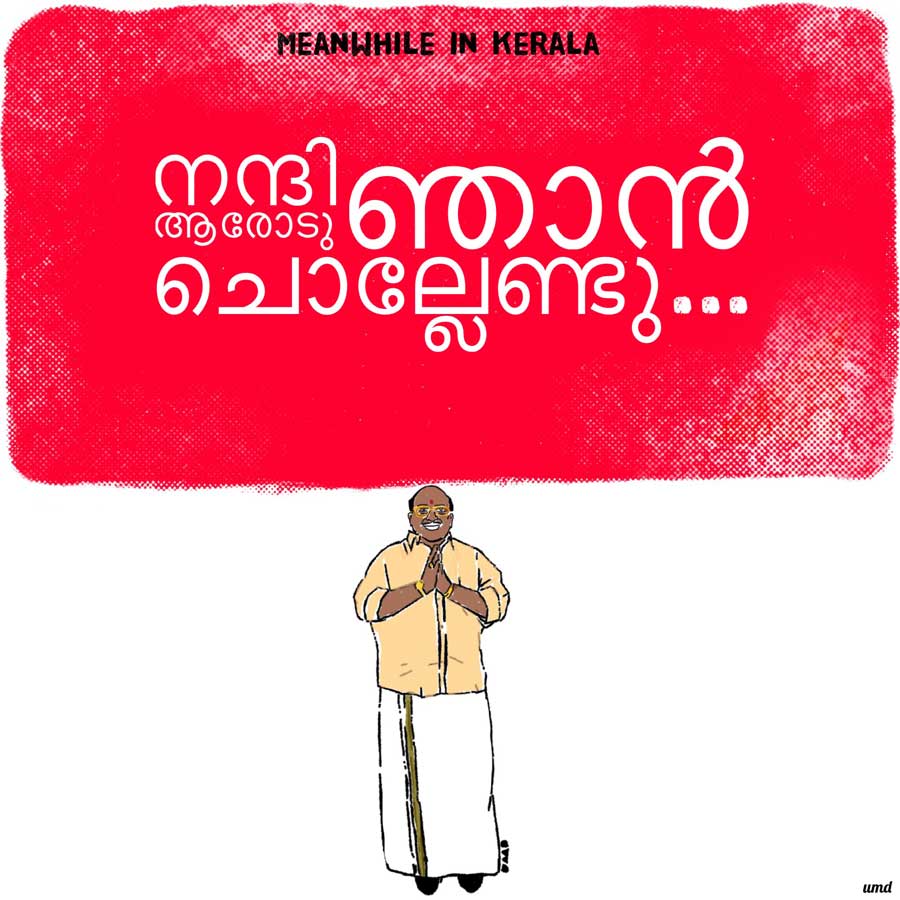