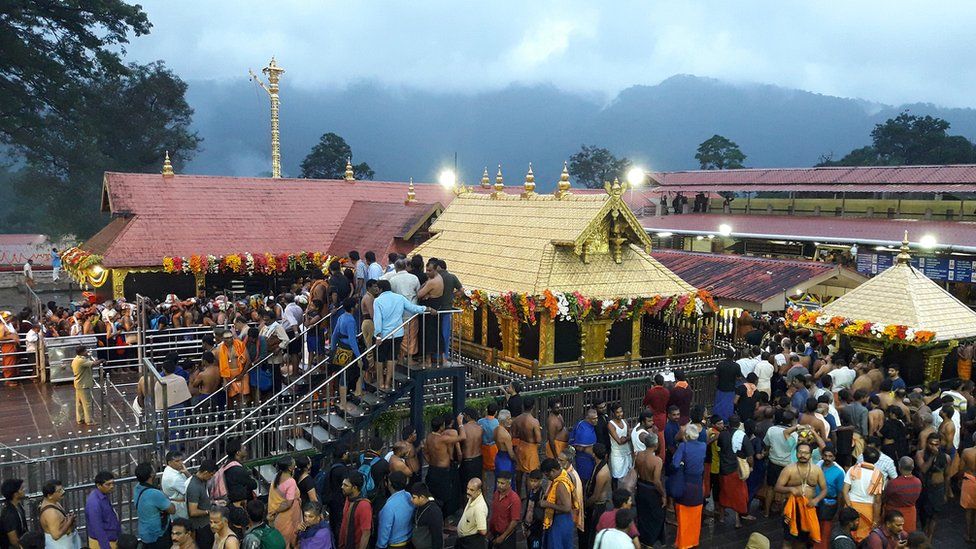 More than a decade after the Indian Young Lawyer’s Association filed a petition seeking lifting of ban on women’s entry in Sabarimala Ayyappa Temple, a three-member bench of Supreme Court (SC) headed by Chief Justice Dipak Misra, referred the case to a Constitution Bench on Friday. The petition assailing the Rule 3 (b) of Kerala Hindu Places of Public Worship (Authorisation of Entry) Rules, 1965, was filed in the year 2006 and the rule has been flayed on the grounds of violation of right to equality and discrimination on the basis of gender.

More than a decade after the Indian Young Lawyer’s Association filed a petition seeking lifting of ban on women’s entry in Sabarimala Ayyappa Temple, a three-member bench of Supreme Court (SC) headed by Chief Justice Dipak Misra, referred the case to a Constitution Bench on Friday. The petition assailing the Rule 3 (b) of Kerala Hindu Places of Public Worship (Authorisation of Entry) Rules, 1965, was filed in the year 2006 and the rule has been flayed on the grounds of violation of right to equality and discrimination on the basis of gender.

The SC decision to refer the case of ban on women’s entry to a Constitution Bench has triggered multiple opinions on the controversy from various corners.

While the women activists have been the front runners in the battle to earn the right to enter the temple, which has long been closing its door for children and women aged between 10 and 50, some people feel such discussions are futile practice. But in Kerala, a general perception has evolved over the years of discussion that women should not be denied their chance to visit Sabarimala as they are citizens of a democratic country who are supposed to enjoy every right on an equal footing to men.

The women activists who are otherwise not regular visitors to worship places, have been stubborn in the Sabarimala case, as they claim it to be a clear case of patriarchy ruling over democracy.

The Governments in Kerala have taken different stands on the issue. While the former LDF Governments were responsive to the women’s demand to open the temple’s gate to them, the UDF Governments strictly opposed those demands saying the restriction was part and parcel of the temple’s internal affairs and cannot be changed over a day’s time.

The newly-elected LDF Government has however emphasised its former stand in this regard and this has encouraged the women here to ally with their demands.

Noted women’s rights activist from Nilambur, Divya Divakaran, has said that though she was not a hardcore devotee she would stand by the demand to allow women to enter Sabarimala temple. She was one among the activists who was part of the ‘pen puli kali'(women leopards) during the famous Thrissur Pooram. Divya said: “I don’t believe that God is confined in a temple or an idol. That energy is present everywhere. The same thing is written at the entrance of Sabarimala temple. Anyway I will surely visit the temple to express my solidarity if the SC allows women to enter.”

She further said that more than a case of spirituality, restricting women from entering Sabarimala was clearly a case of patriarchy declaring young women as untouchables. “Women should be ready to fight any battle to uphold gender equality in a democratic country like ours. Any type of discrimination should be questioned and challenged by people who believe in social justice,” she said.

Meanwhile there is another set of women who consider this as not a pressing requirement compared to many other issues. “I think the major reason why Sabarimala has been following the custom for these many years without much trouble was that women here do not find it a pressing need to be immediately resolved. Otherwise, Kerala women are generally reactive and responsive,” said N. P. Nisa, a journalist based in Kochi.

Advocate A. Jayasankar, a familiar figure among Keralites who has been voicing his opinion in various public issues feels that he was not the right person to speak up in the case of women’s entry to Sabarimala. “I think the main reason for restricting women from entering the temple is the difficulty they may face in reaching there. One needs to travel through forests to reach Sabarimala. There was a case when women in IT companies created an uproar against the Karnataka Government’s rule restricting women from working in night shift. Succumbing to consistent demand from women’s groups, the Government finally did away with the rule. What happened then? There was a plethora of rape cases following it. This is the scenario. Night is meant for taking rest in the house for humans. If women are restricted, they must consider it as a privilege instead of shouting slogans against it. For men, if they have to work in the night shift, it is a burden. Besides, in the Sabarimala case, the demand for women’s entry arose not from devotees, but from several women groups with specific interests. This seems funny,” he opined.

Advocate Renjith Marar, a leading Supreme Court lawyer from the city, said that he was quiet pleased with the decision. “It is the individual’s responsibility to decide if she/he has to go to a temple. Our Constitution gives equal right for men and women for worshipping. There are chances for the SC to decide in favour of women’s demand. If it happens, it is a welcome move as the women get the power to decide if they have to go there or not. This power is intrinsic to democracy. In America, there was a law which restricted women from doing heavy industrial work. The lawmaker justified it saying that it was favourable to the women who would otherwise be forced to work in unhealthy conditions. But the country had to scrap the law after high protest from women and supportive groups. They said that whatever be the case, it was the individual’s decision that matters if she/he has to work in a particular condition. The law should not restrict people from their choices. This is a case similar to it,” he said.

Meanwhile, Sabarimala thantri Kandararu Rajeevaru seemed to be a little worried about the SC decision. The temple authority had earlier taken a stand that women aged between 10 and 50 are restricted because they cannot maintain purity during menstruation. “I have already given my statement in this regard on different occasions earlier. Let the SC decide on it. We will face it then,” he said.

Questions to be pondered

The Bench headed by the CJI has framed several questions to be considered by the Constitution Bench. They are as follows:

1) Whether the exclusionary practice which is based upon a biological factor exclusive to the female gender amounts to “discrimination” and thereby violates the very core of Articles 14, 15 and 17 and not protected by ‘morality’ as used in Articles 25 and 26 of the Constitution?

2) Whether the practice of excluding such women constitutes an “essential religious practice” under Article 25 and whether a religious institution can assert a claim in that regard under the umbrella of right to manage its own affairs in the matters of religion?

3) Whether Ayyappa Temple has a denominational character and, if so, is it permissible on the part of a ‘religious denomination’ managed by a statutory board and financed under Article 290-A of the Constitution of India out of Consolidated Fund of Kerala and Tamil Nadu can indulge in such practices violating constitutional principles/ morality embedded in Articles 14, 15(3), 39(a) and 51-A (e)?

4) Whether Rule 3 of Kerala Hindu Places of Public Worship (Authorisation of Entry) Rules permits ‘religious denomination’ to ban entry of women between the age of 10 to 50 years? And if so, would it not play foul of Articles 14 and 15(3) of the Constitution by restricting entry of women on the ground of sex?

5) Whether Rule 3 (b) of Kerala Hindu Places of Public Worship (Authorization of Entry) Rules, 1965, is ultra vires the Kerala Hindu Places of Public Worship (Authorisation of Entry) Act, 1965, and , if treated to be intra vires, whether it will be violative of the provisions of Part III of the Constitution?