“We will fight this battle until my kid is granted justice,” vows Remya, who has been engaged in an indefinite strike in front of the Secretariat seeking justice for her three-month-old daughter Rudra.

The baby died at Sree Avittom Tirunal Hospital (SAT) for women and children, located on the Thiruvananthapuram Medical College campus, on July 10, 2016, succumbing to kidney failure caused by sheer medical negligence. The parents of the baby and her three-year-old sister Durga have been seeking justice ever since the incident last year. Since the Government failed to bring the culprits before law, the family recommenced their indefinite strike in March 2017. The parents also performed Puja ceremonies with the medical records, in front of the Secretariat, during Navratri.

Remya, Rudra’s bereaved mother, speaks of the hardship her family has been going through to The Kochi Post. “When we took Rudra to SAT for the first time on July 14, 2016, she had only some rashes on her buttocks caused by the napkin. The doctors there said that there was nothing to worry and such cases even did not need medical help. But they anyway asked us to consult a skin specialist and following this we took Rudra to the Medical College on the same day.”

The doctor said there was nothing to worry and she was given some medicines and she started showing recovery symptoms. On the third day at SAT, some PG students came to the ward and they checked Rudra. They said that she would be given a mixture of coconut oil, sugar and lactogen and when Rudra was given this, she began vomiting. When the doctor asked the students what exactly happened, I heard them saying that they had made a mistake and my daughter was given overdose of potassium and sodium.

Remya said that the medical negligence was at its peak as the baby was denied care even when she was moved to the ICU. “Rudra was so tired of vomiting continuously. Her body was weak and cold when she was moved to ICU. She was laid there with tubes all over her body. Remember my child was only three months old. When I felt that she was suffering quite a lot because of the tubes, I went to the doctors seeking help. They asked me to turn my child. How could I do that when her body was covered with all those tubes. Since the doctors did not pay attention, we gathered the bystanders and they put the doctors under pressure to attend our daughter,” she said.

Rudra died at 5 am on July 10. “We know, our kid was a victim of medical negligence. She was not given adequate medical care. She had only some rashes on her body which was very common among infants these days as they wear snuggy. But when she died, the doctors said she had kidney failure. When the postmortem report came, it was stated Rudra died because of pneumonia. The SAT staff maintain that she had severe malnutrition and they propagate this through TV channels and other media,” she said.

“What will we believe. What exactly had happened to our kid. The doctors at SAT even hid some medical records, especially the prescription when we met them in the second and third time. The X-ray report on the previous days had indicated that the kid was alright. But the doctors at SAT have not provided us with those results. All we have with us now is the X-ray report which was taken after she died. And even that we somehow managed to get it. Besides, they wanted to settle the issue offering us money when she died. The doctor at SAT asked my husband to meet him after the funeral so that we would be given an amount of Rs.6 lakh as compensation. Even after we began the strike in front of the Secretariat, they continued to call us and have been doing whatever possible to make us quit our struggle. This time they offered Rs.18 lakh,” she said.

Rudra’s father Suresh Babu is a catering service labourer. The family had temporarily stopped striking in December 2016 following the Chief Minister assuring them immediate action against the culprits. Since nothing in that direction happened, the family restarted the indefinite strike in March, this year.

“When the SAT staff saw that there was the public to support us, officials including police surgeon, Tahsildar and RDO soon approached us for our nod to examine Rudra’s internal organs. They said they would send them to advanced labs in Pune or other cities. But we could later understand that the internal organs were not sent to any labs outside SAT,” Remya said.

“We have faced as many difficulties a father and mother can face. We were even intimidated with weapons while we were going back to home after strike. When we took our daughter Durga to the spot for strike, a case was registered against us under Juvenile Justice Act. We don’t mind anything. We demand the Government to take immediate action to curb the activities at hospitals in which poor people become an object of learning for the student doctors. The PG doctors were experimenting and learning with the life of our kid. We want justice. Nothing else,” she said. 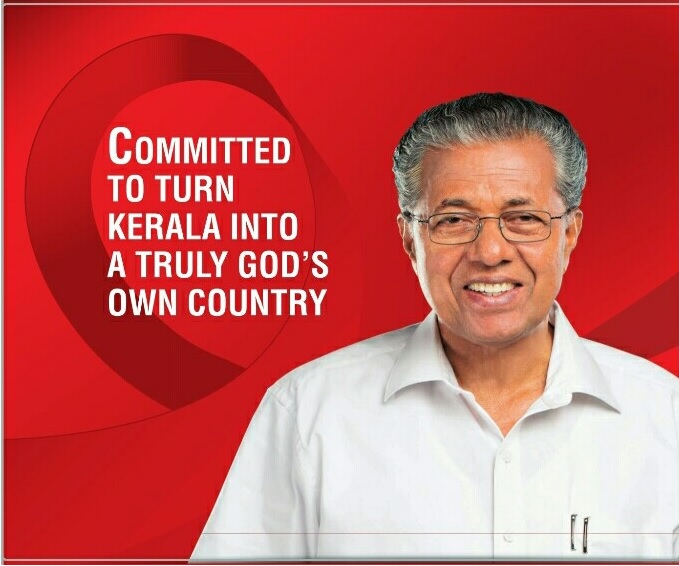 Over Rs. 3 Crore Spent on Advertisements for Pinarayi Vijayan’s Swearing-In