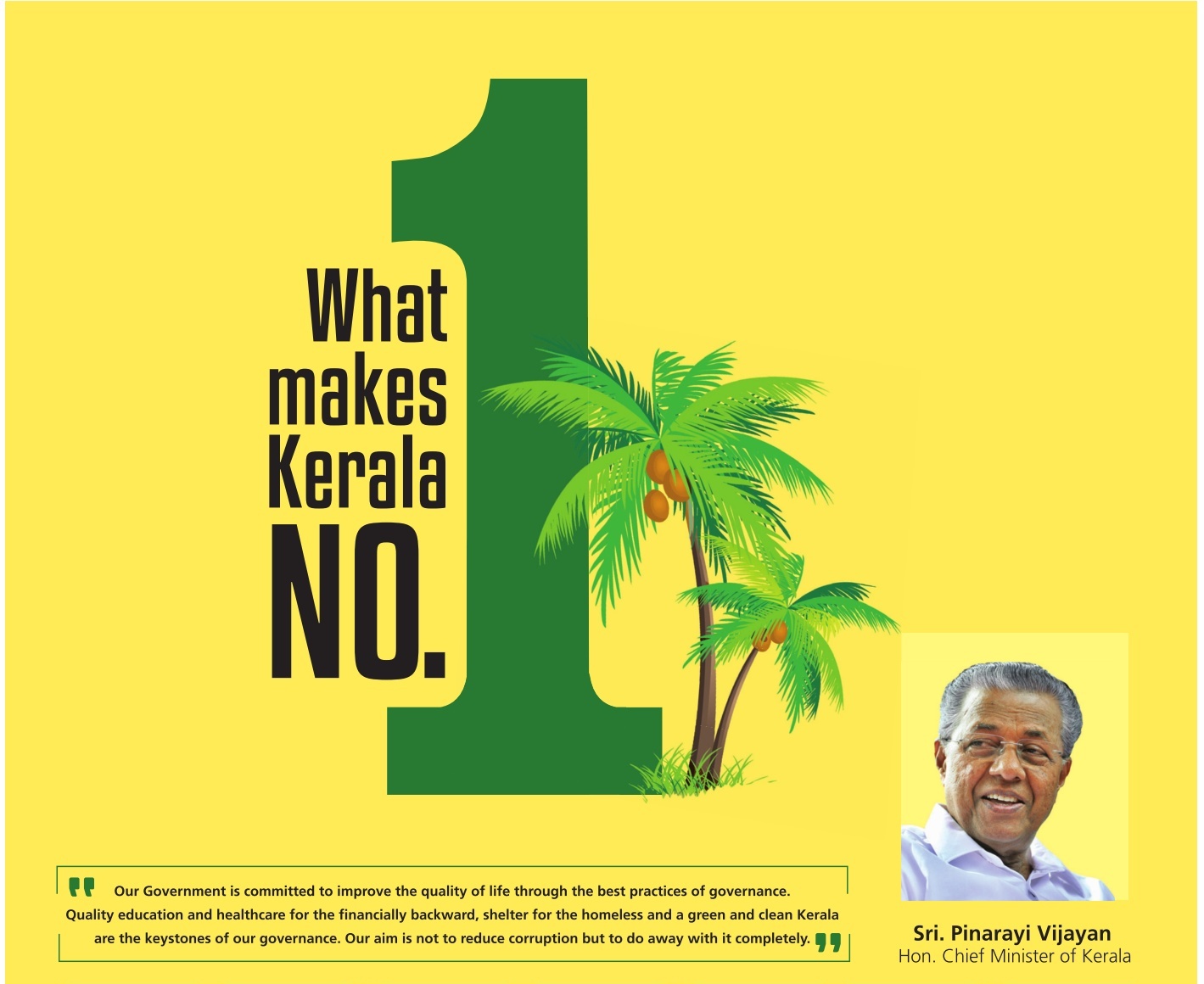 In a continued and obvious battle against the national media lamenting the political murders in the State, the Kerala Government has come up with a full-page advertisement showcasing its various achievements. The national dailies here on Monday published the full-page ad which says why the Kerala Government is on top in many aspects. The advertisement, that goes with the punchy headline ‘What makes Kerala No.1’,  signifies the State’s achievements in communal harmony, literacy, governance and law and order. The ad also claims that the State was the least corrupt State in India based on India corruption study, 2017.

It is included in the full page advertisement that as per a survey conducted by ‘India Today’, the State was the healthiest, safest and the most environment-friendly. Kochi, Kerala’s financial capital, is the fastest growing city in India which even surpasses New Delhi in this category, says the ad. The full-page advertisement also features comments from noted personalities. Spiritual leader Sri. M, former Supreme Court judge K T Thomas and actor Kamal Hassan have commented about the State’s stature in different areas. 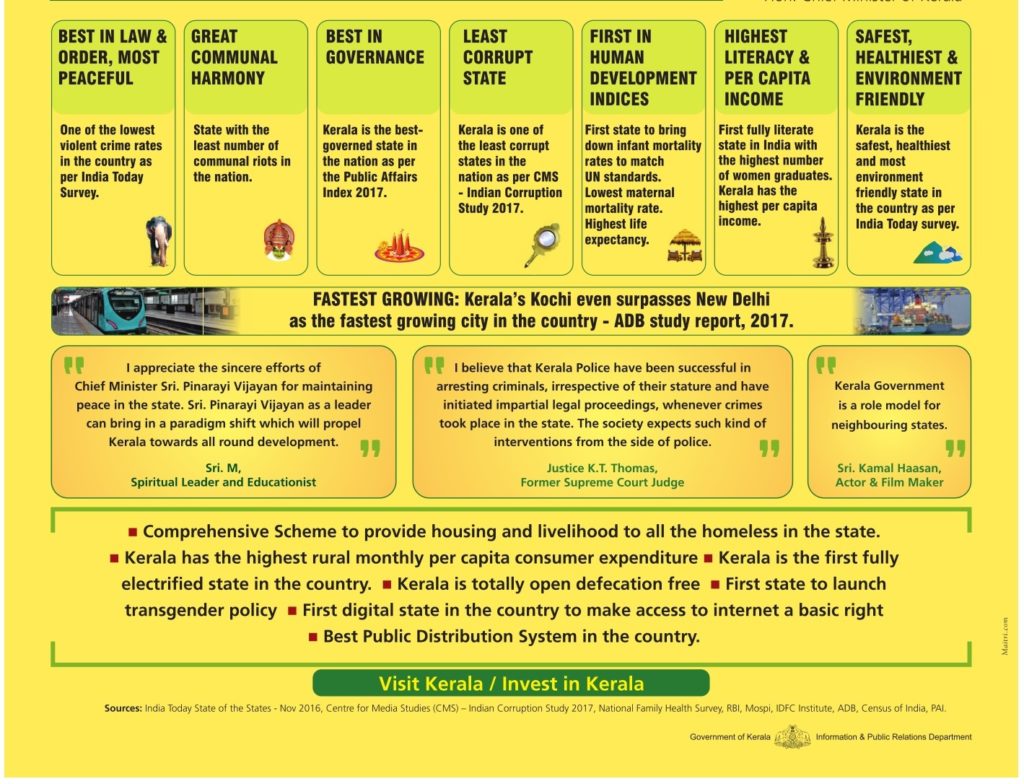 While Sri. M praises Chief Minister Pinarayi Vijayan for his efforts in maintaining peace which would propel the State towards all-round development, Kamal Hassan says the State was the role model in many aspects for its neighbours. Justice K. T. Thomas comments about the achievements of the Kerala Police in bringing the culprits in criminal cases before law, irrespective of their stature.

It is observed that the Kerala Government was anticipating Union Minister Arun Jaitley’s visit to the State making headlines in the national dailies, which have been celebrating the political unrest in the State Capital. The full-page advertisement in the national dailies is said to be a precautionary action by the Government to lessen the significance of Jaitley’s comments on the State’s political atmosphere.

Political analysts in the State have also observed that the Union Minister’s visit in the wake of the political unrest in Thiruvananthapuram was a step ahead of the BJP-led Union Government’s plan to topple the Communist-led Government in the State by imposing President’s rule. The Kerala media had criticised the BJP’s intentions in harsher terms on Sunday when Jaitley reached Thiruvanathapuram to visit deceased RSS worker Rajesh’s relatives at his house. Leaders of political parties in Kerala had also alleged that the violence in the State Capital was planned and executed by the BJP/RSS functionaries to shift the public attention from the medical college bribery allegations levelled against several BJP leaders in the State.

The advertisement signals that amidst all these towering achievements and great support from the general public it would be nearly impossible for the Union Government to impose President’s rule in the State. 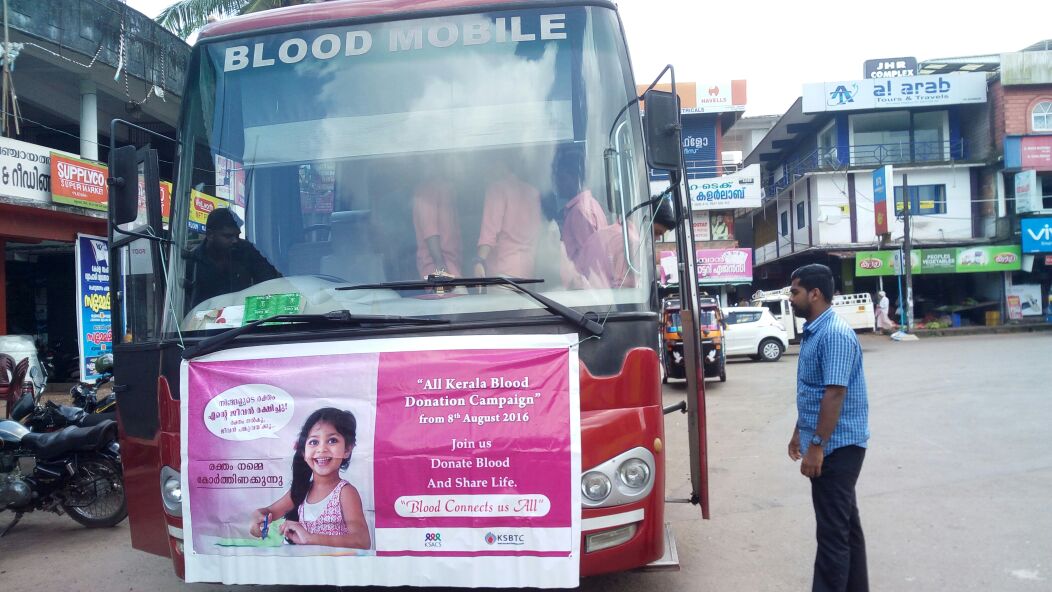