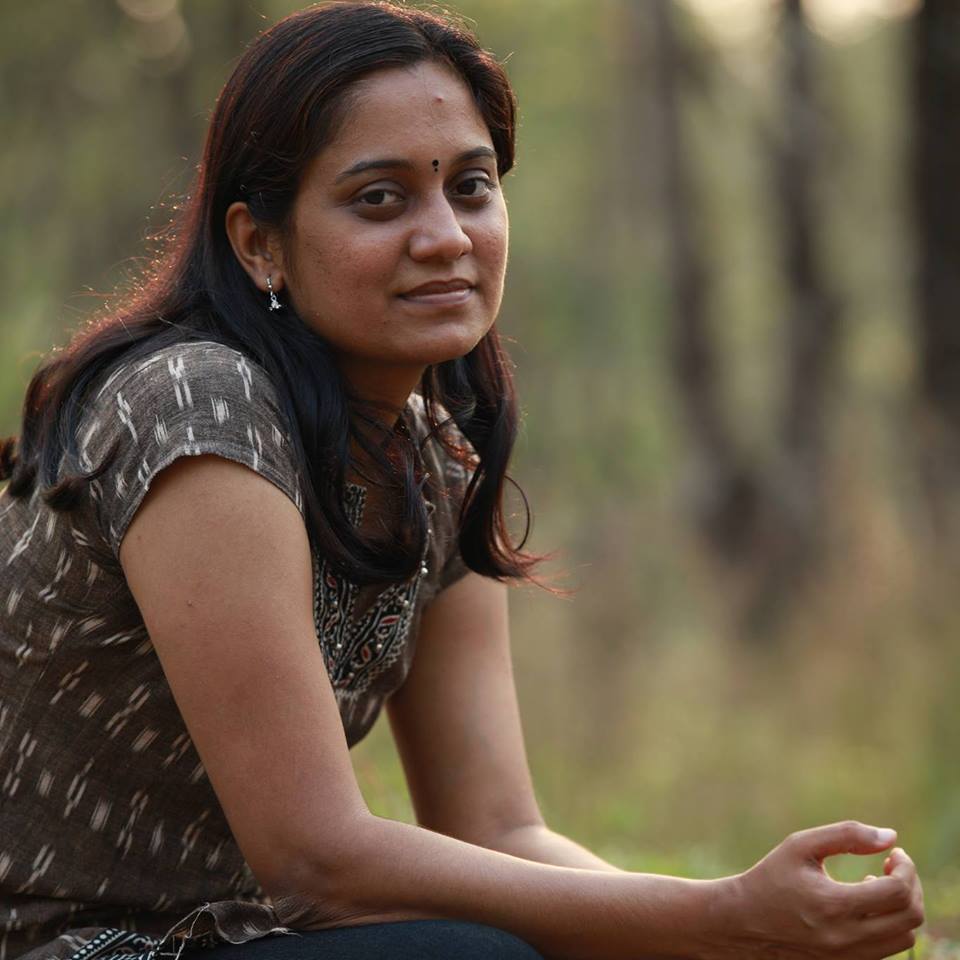 Sreebala K Menon: Cinema is seen as a commodity to be viewed by men and crafted for their taste

Sreebala K Menon is a Malayalam Movie Director and an Author. She won the Kerala Sahitya Akademi Award in 2005 for ‘Best Humor’ for her book ‘19, Canal Road’. She worked as an associate of director Sathyan Anthikad for several years before venturing her first movie, Love 24*7 starring Dileep and debutante Nikhila Vimal.

In this interview with, Raghul Sudheesh, Sreebala talks about being a woman in the film industry, her journey from a post graduate student of English Literature to a film maker, the State Awards, Love 24*7, joining film schools and much more.

Can you tell us about your journey into the film industry? Was it difficult being a woman?

Sreebala K Menon is a Malayalam Movie Director and an Author. She won the Kerala Sahitya Akademi Award in 2005 for ‘Best Humor’ for her book ‘19, Canal Road’. She worked as an associate of director Sathyan Anthikad for several years before venturing her first movie, Love 24*7 starring Dileep and debutante Nikhila Vimal.

In this interview with, Raghul Sudheesh, Sreebala talks about being a woman in the film industry, her journey from a post graduate student of English Literature to a film maker, the State Awards, Love 24*7, joining film schools and much more.

Can you tell us about your journey into the film industry? Was it difficult being a woman?

I was born in Palakkad and brought up in Thrissur. My parents were college Professors and were working in Thrissur. Their expectation was that I would go into academic field. Even I did not have bigger ambitions. There were no thoughts of career options in those days. I was a post graduate in English Literature and was always interested in creative writing. Despite the fact that I studied English Literature, I was more expressive in Malayalam. But then creative writing alone could not be taken as a career option in those times.

I saw Cinema as a medium which could help me to retain my passion of creative writing and one to reach the masses. I wanted to join film school from the days I completed my pre-degree and graduate studies, but my parents felt I was risking my career and wanted me to complete my studies. After my post graduation, my parents were fine with me pursuing a career in cinema but then it was too late to join a film school and pursue a three year course. I then joined C-DIT, Thiruvananthapuram for a one year course in Documentary Making (Development Communication).

At that time, I never knew this was a gender biased profession. Had I known it, I would have perhaps taken another decision. It was difficult to find a slot as an Assistant Director and I had faced so many rejections. I used to write from those days and Director, Sathyan Anthikad happened to read my writings. He knew me as a writer and I approached him. He said things would be difficult as there are hardly any women in the technical crew. I was still persistent and wanted to pursue an internship with him and then decide on my career. That was how I landed in the crew of the movie of Narendran Makan Jayakanthan Vaka and I felt like a fish out of water. It was really difficult and different. I then came back to C-DIT and worked there for two years. It was then I became part of many Government projects. I had a feeling that I was not suited for cinema and focussed on other forms of visual communication.

Sathayan Sir was in the process of filming Achuvinte Amma and the main characters were played by female leads. They also wanted a woman in the technical crew as it would be easy for them also. Sathyan Sir called me and asked if I wanted to work again. I decided to give it a try again and then I fell into the track.

So then onwards you were comfortable in the industry?

Now I am fine and that is because I have been in the industry for so many years now. I would not say comfortable. To say that it would be a comfortable industry for women, may be it will happen with the next generation. This is a hugely male dominated industry.

You are probably the only woman to have worked as Assistant Director and then turned a Director in the Malayalam film industry?

Yes, I think so. It was my purposeful decision to be an Assistant Director first and then a Director. In this industry, a social acceptance is needed to sustain and to get a social acceptance we need to know each other well in the industry. I thought this was the way for that.

How do you feel to be a woman in a male dominant industry?

Most of the questions asked on male dominance are related to the work place and work culture. That is there with most of the other profession also. What I have felt with regard to male dominance in the industry is that, Cinema is seen as a commodity to be viewed by men and one manufactured for their taste. We should be able to think like men in our minds. We have to craft movies that suit the taste of men. When we see certain movies, we say it is a women oriented movie. It does not mean women likes that, it is your perception. In all times, Indian film industry has always catered to the taste of men alone. Film always is made by men and for men. In that industry as a woman filmmaker, how do you make such movies without compromise, is the real challenge.

We often hear in the news that a person did certain thing at a particular age. I think in our society, achievements are always connected with age and society feels great about achieving things at young age. I think it’s about our choices and I have not found any rationale in this.

With time, people began seeing film making as a career and it is only in career you have ups and downs. If it is your passion, how does it matter if you do your films at 20, 40 or probably 60?

Coming to Love 24*7, I wanted to do my first movie on a different topic. I wanted to do something on love story of two different ages and the younger couple being working in the media. I feel media has been not explored much in the Malayalam industry. And that was how it happened.

What everyone does, including us, we see the so called ‘cinema’ in theatres. Rest of it is downloaded via Torrents or viewed with DVD’s. We see them at our convenience and say those are superb movies. What everyone needs in this stressed age is entertainment and we go to theatres for that. When it comes to realistic cinemas and people who make that (including mine is seen as a realistic film), the problem they face often is that; it takes time to reach the people. By that time, the movie would have gone away from the theatre. We cannot make the producer suffer. I being one among the audience can say that we need more of entertainment from the screen owing to our stressful life and the trend has not changed.

Can you tell us about your case against a flat owners’ association for allegedly intruding into your personal life?

This was in 2005 and I was living alone in an apartment. The owner had no problems with me staying there or people visiting me. But the flat owners’ association representatives wanted to know the details of people coming to my flat and demanded the visitors to jot down their details in the visitor’s register. This rule was applicable only to me and I felt this to be a humiliating behaviour. In their eyes, I was living without any protection of a man and they wanted to be my protectors. I was not doing anything against the law. I was fighting for a right for people to enter my home at anytime. I had to suffer a lot of humiliation because of the fight I put up.

Even though I got married later and my issues were resolved, many women even today approach me with this issue. A lot of men are also facing this issue. When someone takes an apartment with a singular status, that apartment is the focus of everyone in the apartment complex. Interestingly, another set of people who took an apartment under the pretext of being a family in my apartment, were later caught for running a brothel house there.

Have the State Awards become a joke?

When it comes to me, definitely not (laughs)!  When I was a child I used to think, the award goes to only movies which we have never seen or reached us. Commercial movies never used to win awards in the past; there were another set of movies for awards. As time passed, the trend has changed. National Awards and State Awards have reached movies and people familiar to us. We have a say in National Awards and State Awards because the taxpayers’ money is involved. However, the Private Awards have no change then and now.

Awards will come and go but your work will remain there. If it has the quality, it will overcome the test of time and will be appreciated.

What is your message to women who wish to come to this industry? What are the access barriers?

You should never see this as a 10-5 job. Nobody except women wishes that a woman should come to this industry. It totally depends on one’s will power. A peer group support like for men would not be available for women at least in this generation. It may be there for the next generation. It will be a singular fight for years. But it is totally worth it and everyone can achieve in the industry with proper focus. There is a lot of competition and you have to keep competing.

Will going to film schools help?

Definitely, it will help. I wished to study at a film school but in our times accessibility was a big issue and there were only three or four film schools for the whole of India. Now there are plenty of film schools and there is a lot of exposure. You can see a number of films and you can decide what kind of films you want to make. The peer group is also excellent. One thing to be noted is that, a person from a particular school will be trained in a particular way. You have to decide whether you should be keeping that or not.

Would you like to be known as a Writer Sreebala or Film Maker Sreebala?

I would not wish to be known! I am an introvert (laughs). At the end of my life, I would be happy if I am remembered as a genuine human being.

Can you tell us about your upcoming movies?

I am working on my new script and the producer has been finalised. Once the script is over, I will decide on other things.

Sreebala is conducting a workshop in Kochi exclusively for women to understand about film making on the upcoming two Saturdays (June 18th and June 25th). If you wish to participate, you can contact on +91 8089160844 for more details. 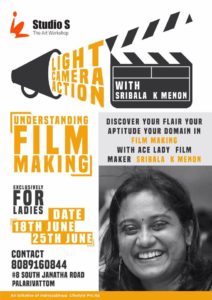