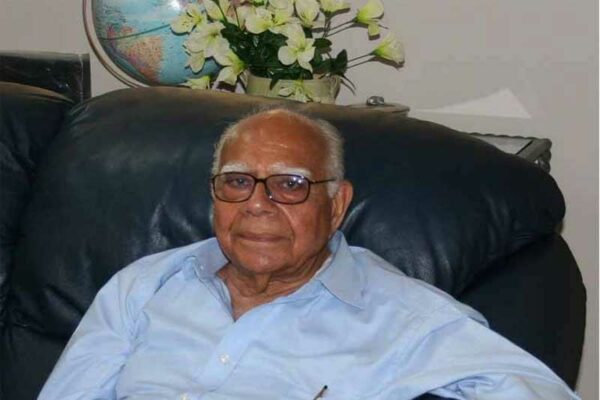 Ram Boolchand Jethmalani (1923-2019), the Maverick of the Indian Courts of Law, was a lawyer by profession and a teacher at heart. I fondly remember he used to tell me that “I am first a teacher who happens to practice law”.

He obtained his degree in law at the very early age of 17 years and the very first case he fought was his own which showed that he was destined to be the man the world knows today. After practicing in Karachi he moved to Bombay as a refugee during the 1947 India-Pakistan partition and set his base in Bombay. Known for his timeless and unfading contribution to the legal justice system of India, he had gained popularity after being involved in the landmark case of a decorated officer in the Indian Navy known as the K M Nanavati Jury Trial.

With his sound knowledge of the law and his vast experience at the Bar, he had turned the trickiest cases upside down. The legendary criminal lawyer defended smuggler Haji Mastan, Harshad Mehta and Ketan Parekh in securities scam Case, BJP Leader L K Advani in hawala Scam, assassins of former Indian Prime Minister Indira Gandhi, Manu Sharma in Jessica Lal murder Case, DMK leader Kanimozhi in 2G scam, Asaram Bapu in a sexual assault case and late Tamil Nadu Chief Minister Jayalalithaa for disproportionate assets case, Delhi Chief Minister Arvind Kejriwal in defamation case filed by the Late Arun Jaitley, assassins of former Prime Minister Rajiv Gandhi, Lalu Prasad Yadav in fodder scam, NJAC—the list is endless and I am glad that I was part of a few of these cases which left a mark on the Indian Judicial system.