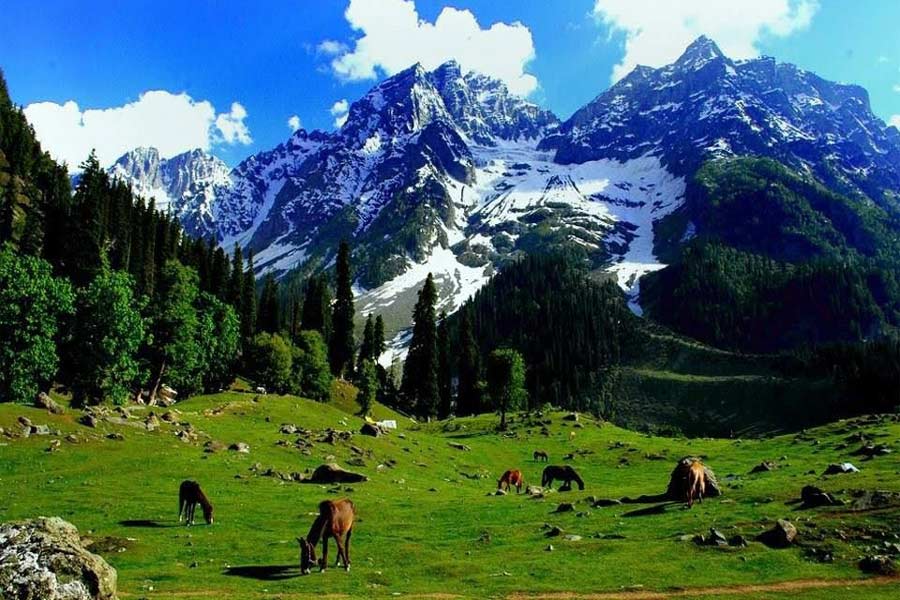 The love-bombing of Kashmiri Muslims began within minutes of Prime Minister Modi announcing the scrapping of Article 370 of the Indian Constitution, which deprived Jammu and Kashmir (J&K) of its much-maligned, though by now largely fictional, autonomy. 30,000 additional troops had moved in, apart from restrictions on mobility and the imposition of a total communication blackout, as J&K was converted into an open-air jail overnight.

The Prime Minister himself, along with cheerleading news anchors, embedded journalists and social media influencers all took up the narrative that this unconstitutional act was an act of love for Kashmiris, especially its Muslim population.

In his speech, Modi spoke of freeing the people from the rapacious rule of dynasts, from venal separatists, and from Pakistani terrorists. It was for their development, prosperity, and realisation of full citizenship that he was doing this. He spoke not so much “as a gentle mother to her child”, as Arundhati Roy noted, but as a disembodied voice, far removed from the situation his own actions had created, his attempt at lofty ideals and verbal balm the diametrical opposite to reports coming from the ground of repression and isolation.

Expectedly, Amit Shah said that Modi’s actions would free Kashmiris from the curse of terrorism, and young men “misled” into taking that path would now seek peace. Others spoke of love for Kashmiris, because they would be now on the path of development, notwithstanding the fact that Kashmir had better indicators than most of the states in the cow-belt.

Some of the other justifications were even more tenuous: That Kashmiri women would enjoy the extension of the ban on Triple Talaq, or, as Baijayant Panda, in his new avatar as BJP Vice-President, stated in the most ‘out-there’ justification, that the end of these would facilitate the extension of LGBTQ rights.

For a party that repeatedly used demonization of Kashmir and Kashmiri Muslims to win elections, the BJP’s new-found love for Kashmir is surprising. They spared no opportunity to paint the Congress-led UPA as hand-in-glove with “corrupt” Kashmiri dynasts and soft on terror by having talks with the separatist Hurriyat Conference leaders.

Hindutva Whatsapp networks and social media in general, the real register on which the reactions to Modi’s actions matter most, had long painted a picture of Kashmiri terrorists sheltering in visibly Muslim areas such as in Jamia Nagar and Nizamuddin in Delhi. Sangh Parivar-affiliated news anchors and ‘influencers’ had drummed up support for the use of pellet gun on demonstrators, in which many youth had been injured in the recent past, losing sight. There was wide support among Modi’s fans for Major Leetul Gogoi infamously tying Farooq Dar, a Kashmiri in Budgam, to the bonnet of his jeep and using him as a human shield.

Leading up the 2019 elections, Kashmiris studying or making a living as small traders in other Indian states faced violence from the militant Bajrang Dal and self-identified Hindutva activists in Lucknow, Patna and Bengal, among other places. These were relatively cost-free ways of doing controlled-communal polarisation, a key electoral strategy through which the BJP set the mood music for the polls.

The vilification of the Kashmiri trader and student living and working in India continued until very recently: Alt-right influencer Shefali Vaidya claimed to have counted Kashmiri businesses in holiday destinations, hinting that these were dens of terrorists that were funnelling money for terror. In the Hindutva universe, the Kashmiri Muslim was never an equal, never a citizen, but a perfidious traitor who did not deserve any rights let alone love. The “Kashmiri Muslim” was for them a surrogate for Pakistan, and for terrorism in general, the thin end of the wedge in the imagined conspiracy in which they were the agents of Islamic State, or lesser Pakistan-funded terror outfits.

There is love in Modi’s action and the gloating that followed it. There is a love for the radical Hindu: look at us—we offer development and security to these people who hate us; a self-congratulatory love of those who hold all the levers of power.

There was no love for families distressed at not being able to contact their families during Eid—in a typical false equivalence, false also for the detail it contained, Sangh Twitter handles said Kashmiri Muslims should not make a big deal of it as Amarnath pilgrimage took place under the shadow of terror—or that, inevitably, soldiers at the border stay in worse conditions than the average Kashmiri.

Kashmir was sick, it needed radical surgery; Modi was doing it, a period in the ICU was needed, and then a long recovery before people in Kashmir could exercise their rights of citizenship. This new-found love for the “people of Kashmir” is well encapsulated in this tweet from alleged journalist and Hindutva alt-right rising star Anand Ranganathan: 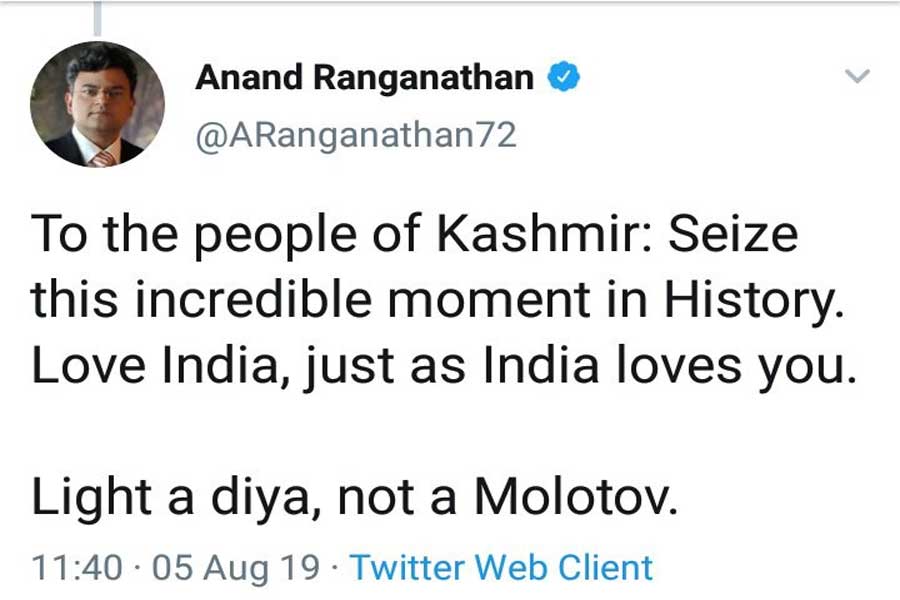 Consider what this tweet is saying: That enhanced military repression, greater armed presence, cutting people off from their families outside of Kashmir by suspending mobile and landline telephone connections, imposing a news blackout and disrupting everyday life was a sign of ‘love’, a ‘nudge’ to give up what comes naturally to Kashmiris, the Molotov, and to adopt the Hindu symbol of the diya.

This tweet gives away what love Hindutva triumphalists are really talking about: a love based on the deferral of humanity, agency and good sense to those towards whom it is directed—in other words, the love of the coloniser for the colonised. It is the acid-thrower’s love towards his victim. It is, to say differently, no love at all. 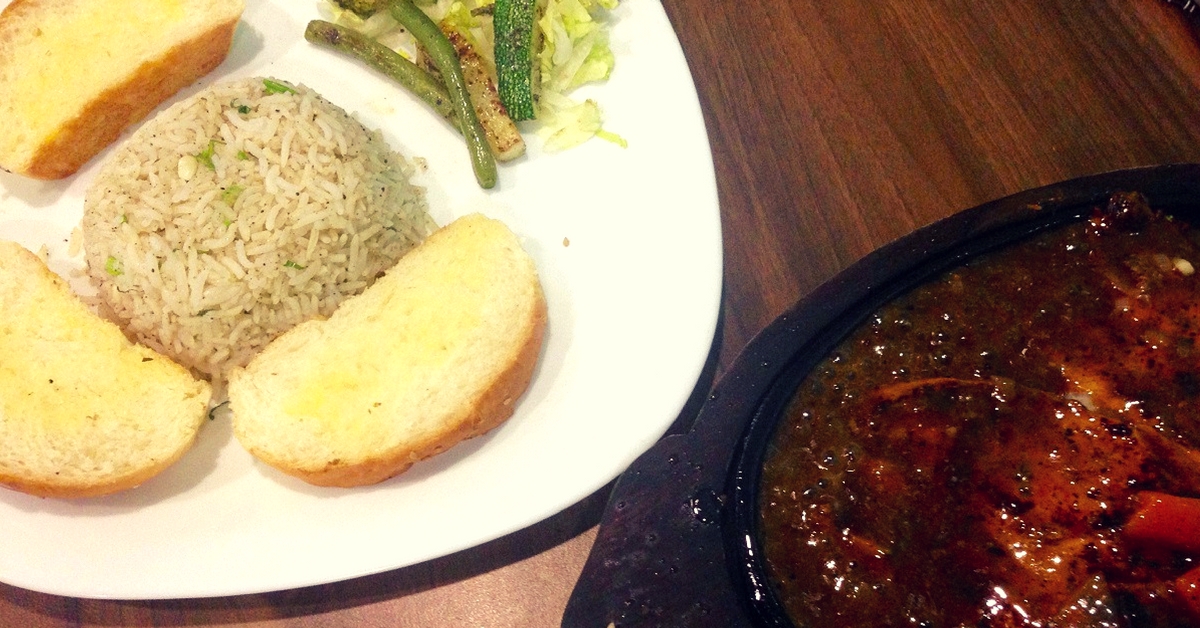 RESTAURANT REVIEW: Truffles Bistro in Trivandrum Is Worth a Visit for Its Yummy Shakes and Burgers