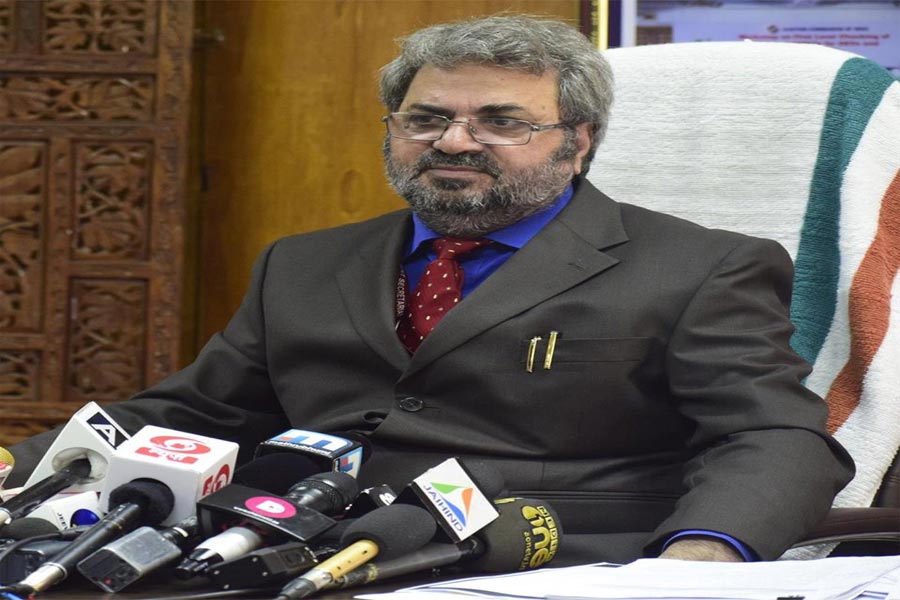 Even as the toothless Election Commission of India (ECI) has failed to implement the Model Code of Conduct, his counterpart in Kerala is making all the right noises. Despite falling foul of the ruling Communist Party of India (Marxist) and the BJP (and even the Congress to some extent), he is asserting a rare independence that seems reminiscent of some of his worthy predecessors.

Meena seems to possess the clear conscience that is interlocked with his agrarian background. He has come up the hard way, braving all odds. As the Chief Electoral officer, Meena is having a tough time addressing challenging issues like bogus voting and rigging of postal ballots, typical of a politically-charged state like Kerala. But undoubtedly, Meena has the tenacity and will- power to face any grave issue head-on.

Born as a poor farmer’s son in rural Rajasthan, Meena worked his way up with perseverance. The story goes that Teeka Ram yearned to go to school, get a job and break free from the shackles that he was bound to. But born into large farmer family, he was expected to take up farming—toil in the field from morning till evening. Responsibilities of a young boy in a remote village like Pura— Khirni in Sawai Madhopur district of Rajasthan were very many.

Even from his early days he was tied to the land: right from grazing, bathing and milking the cows to helping his parents and siblings with other farming activities. He had little choice as a farmer’s son is always a farmer as young Teeka Ram Meena learned. In the surname, Meena, lies his claim to his tribal ancestry, something that he wears with pride.

Though his illiterate parents—father Jairam Meena and mother Dhapu—wanted their children to go to school, they couldn’t afford it. The eldest son, Rathan Lal, was sent to school and he rewarded his parents by passing with flying colours. An exuberant Jairam borrowed more money and sent him for higher studies to Sawai Madhopur, some seventy kilometres away; and then to Delhi. Rathan Lal wrote the civil services examination and entered the Indian Police Services (IPS).

By this time, his two younger brothers had become good farmers. He entreated with his father that at least his youngest sibling, Teeka Ram, should be given a proper education. An enthused Teeka Ram pursued his studies with vigour, but at the same time, he could not shirk his farm duties. And sometimes he had skip class to help out with the sowing and harvesting.

That didn’t deter him from learning. He picked up English words by reading any book that came his way but he was still unable to speak the language. After he had completed BA in Politics, his brother took him to Delhi. Teeka Ram joined Delhi University for his MA and was determined to crack the Civil Services exam. In his first attempt, he cleared Group 3 and got a job in the Delhi secretariat. He then cleared the Railway Service exams and finally cracked the Civil Services in 1988 and was deputed to the Kerala cadre in the Indian Administrative Service (IAS).

The man had a steely resolve was evident in the way he dealt with issues. When the then Food and Civil Supplies Minister T H Mustafa, in the 1991 – 96 UDF ministry, wanted him to be lenient to a host of flour mill owners who diverted large quantities of wheat from the ration circuit, Teeka Ram refused to budge. The mill owners, in connivance with officials, were making money by selling wheat flour that they acquired from the ration shops at dirt cheap prices.

Meena took action after John Mundakayam of Malayala Manorama, the Malayalam daily, broke the story. The minister tried to rein in the young officer, but he was resolute in his stand. On further investigation, he found that some of the mill owners had evaded sales tax to the tune of four crore rupees. They were forced to pay up. And Meena brought to an end the practice of diverting wheat meant for the poor people of the state to the big mill owners.

Meena was soon shunted out of the Civil Supplies department. For a brief while, he was without a job following which he was appointed the Joint Secretary in the Education department. Later, he was appointed as the Managing Director of Kerala Premo Pipe Factory, a government company in Kollam. To his astonishment, he found the company had not been functioning for years and had no employees. There was no office, no vehicle, nothing to manage and no salary to be had.

The then Secretary of Irrigation, N V Madhavan, got him the post of a Joint Secretary in the government Secretariat so that he could have an office and a chair to sit on. But there was no official vehicle. It didn’t bother Meena much. He started commuting to the Secretariat by the state transport. Just like a clerk, he would go to the nearby bus stop, board a crowded KSRTC bus and reach the Secretariat. His colleagues in the IAS fraternity heard about this and came to his rescue. They started picking him up every day and continued to do so till he got back his official vehicle.

That was not all. The Minister, T H Mustafa, wrote adverse remarks in his confidential report. He wrote that Meena was a disobedient officer who divulged official matters to journalists. The UDF government seemed determined to corner Meena but senior IAS officers came forward to support him. They met the then Chief Minister K Karunakaran who didn’t extend any help. Karunakaran soon lost the Chief Ministership to A K Antony in early 1995. Meena gave a representation to the new Chief Minister but Antony too ignored the upright officer.

It was only during E K Nayanar’s time in 1996 and another representation by the IAS fraternity that Meena finally got the much needed reprieve. Nayanar removed the negative comments written by Mustafa in his confidential report. And Meena was made the District Collector of Thrissur in 1996. When he received complaints about illicit liquor, Meena, aided by Trissur SP B Sandhya conducted a midnight raid on contractors trading in hooch across the district. Prominent contractors with political connections were taken into custody. It was now the turn of the Left to be caught unawares. Meena was immediately packed off to Wayanad. And on some flimsy reason, he found himself suspended.

The IAS Officers’ Association took it up with Chief Minister Nayanar. Association President (and Principal Secretary of Finance) Vinod Rai led senior officers to meet Nayanar as did Additional Chief Secretary D Babu Paul. When the matter came up in the next Cabinet meeting, prominent ministers including Paloli Mohammed Kutty and then Power Minister Pinarayi Vijayan backed Meena to get the suspension order revoked.

Twenty years later, Meena is Kerala’s Chief Electoral Officer. Although he had a brush with controversy when he plastered his mug on Election Commission posters and advertisements, the Kerala public is willing to overlook such trivial issues if he will continue to play straight. And knowing his past, Meena is unlikely to yield to his political bosses or anyone else regardless of the pulls and pressures.

Why Is Kerala’s Vernacular Media Silent on Dawood Ibrahim’s Alleged Involvement in the Fake Currency Racket in the State?