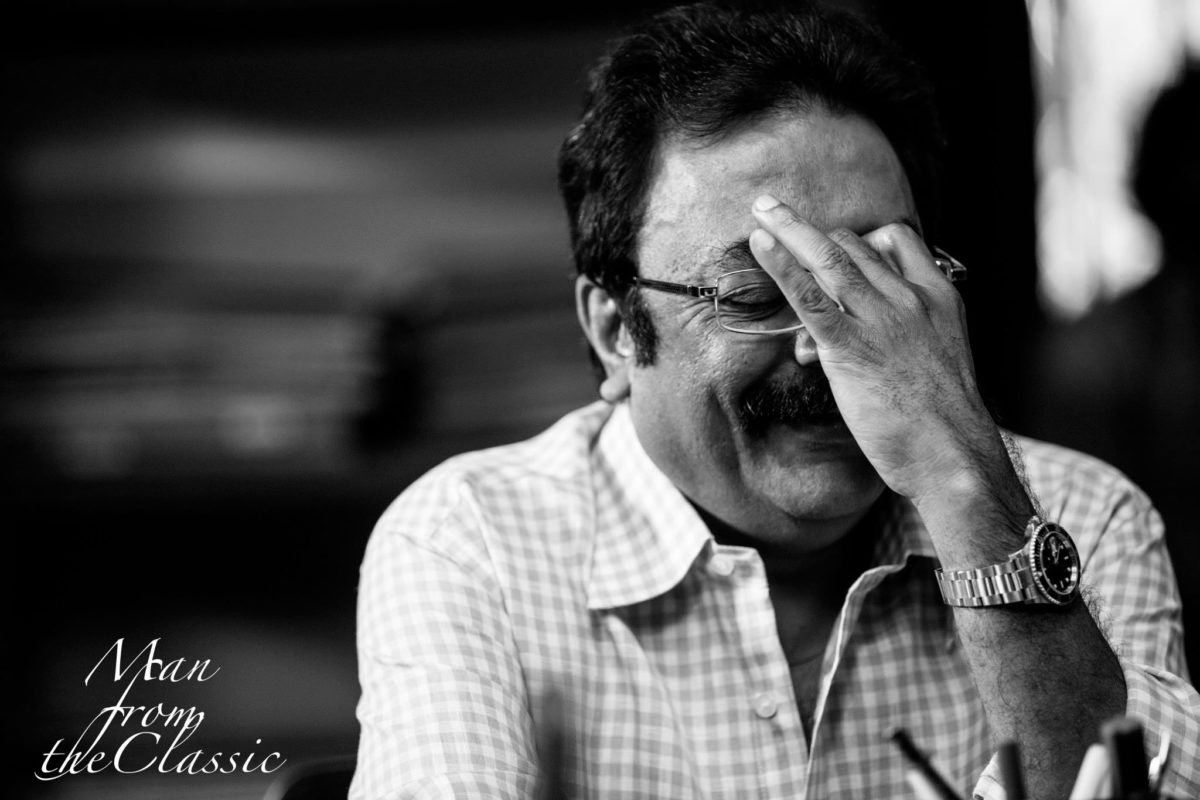 Photograph of Pratap Pothen from Facebook by Hasif Hakeem

If you are a Malayalee, you know Pratap Pothen. I am not going to bore you with a lame introduction. He has a detailed Wikipedia page and an active Facebook page if you want to refresh your memory.

A few weeks ago he was kind enough to spare some time for The Kochi Post and answered some of our questions over the phone.

Photograph of Pratap Pothen from Facebook by Hasif Hakeem

If you are a Malayalee, you know Pratap Pothen. I am not going to bore you with a lame introduction. He has a detailed Wikipedia page and an active Facebook page if you want to refresh your memory.

A few weeks ago he was kind enough to spare some time for The Kochi Post and answered some of our questions over the phone.

Here is the interview, if you have any follow up questions, please ask them in the comments.

I enjoy your new roles, mostly as villains because there is a sense of reality to it. Do you think in the Malayalam movie industry we are doing a disservice to our heroes by removing any sense of reality from them? Our heroes should be good dancers, good in physical fights, women falling for him and can sing etc.? Isn’t it time we changed our depiction of heroes?

I think this changing too. It’s taking longer than the villains but it is changing. In the most popular movies, it is the audience who decides what their hero should be. It’s a preset image and no matter what the story, the hero should play out that image.

As the audiences are changing, the characters, especially the heroes are changing. The number of dances in Malayalam movies are especially coming down. For the average movie viewer, going to the movies, is like a celebration. He wants to be entertained and he wants a bit of everything. When his or her concept of what is entertaining and their tastes change, we will see characters and movies change too.

Do you see the late 90s and early 2000s as lost years? We have alpha male heroes who could do no wrong and the movies always ended with a physical fight involving everybody. Is this because the directors and producers lost touch with the changing audience or they didn’t care and wanted to stick with a working formula?

People go to see their stars, their dance, music, singing, dialogues and fighting. There is no particular formula. There are must have components because as I said, for a viewer, it is like attending a festival. If there was a formula, then everyone would do the same and everyone would be a hit. Maybe some believe this but over 90% of films are a flop.

As I mentioned earlier, people have an expectation of what their star’s movie should be like. In India, stars are more than just actors. If you were going for a Bruce Lee movie, you want to see him fight. You don’t want to see him sing and dance around trees. People prefer to see their stars stick to the image they have of them. It’s the same for Shami Kapoor, Shivaji Genevan to Kamal Hassan and Prabhu Deva.

The rise of music channels, like MTV, changed the way movies did songs. They needed to me less contextual and more entertaining on its own, like a music video should be.

Are you happy with the way women are depicted in our movies? What has changed over the years?

There are women oriented movies but they are very few and far inbetween. Queen is a good example of this, great movie but we don’t make movies like that often enough. The simple reason is that we don’t write for women. And it’s not a unique feature of Malayalam, Tamil or Hindi movie industry, it’s same everywhere, even in Hollywood.

In short, we need a variety of films to be made. Female lead roles are one of them, and we will see more of this as our viewers change.

Why do most actresses retire after they get married?

Women join the film industry, very very young. Some as young as 16. By the time they are 25 and are sadly seen as old 25. Every year there are new girls going the industry and for most roles, the audience wants to see young girls.

Since most of our movies are hero or male dominated storyline, directors are more flexible in casting newer faces for female lead roles.

In the old times, most women actors wanted the security of marriage but this is changing now. You must keep in mind, cinema is a career which will women will need to find a balance between family and work. It’s not easy.

Here also, image plays a role. A female actor’s opinion amongst viewers change after they are married in most cases. For a male actor it doesn’t change as much. Mammootty can be 65 and still dance around with female lead who might be 30 years younger.

In some cases it does make a difference, Rajesh Khanna had 16 hits in a row before he got married. Once he was married he had flop and flop. It’s because of image. I think his core audience didn’t see him the same way after marriage.

There are a lot of young movie makers know. A lot of them doing some good short films on YouTube. You think they will be able to break the control of the various associations (theatre, technicians, producers, artists etc.? How long can will these associations serve as gatekeepers?

Every association or union has a noble purpose. They are suppose to help their members in need. Sadly they don’t stick to that. There is a lot of bullying involved now. Every association seems to want to do some amount to chest thumping to make sure they are not seen lightly by the others. In addition to vanity, there are also factors outside the cinema realm such as other business deals, political connection, which start to play a role.

But this will change. And the biggest catalyst for this change would be technology. To make a movie is easier, to distribute it is easier. I can’t predict the exact change but if you look at how most of us are reading news from our mobile devices compared to the morning newspaper, you can get a sense of how technology is changing our habits. Right now you spend a lot of money going to a theatre to watch the movie and your options for entertainment are increasing. The internet and mobile devices are changing this dynamic, everything is on demand. Those who can adopt can take advantage of this change others sadly will be left behind.

Do you have fans and welfare association? Every ‘star’ seems to have one. If someone comes to you with the intent to start one, what would your advice to them be?

I don’t have one and I don’t want one. I will say no anyone who comes to me with such an idea. I am not here to compete or compare with others. Fans are like a mob, the only practical use is to ensure a good opening. They can all go for first day of release and make it house-full.

But if the movie is not good the movie will tank. Main lead actors charge a lot of money and the first three days collects can go a long way in paying for them. In the past movies would run for 50 or 100 days, those days are gone. A movie is now on your TV or YouTube before that.

Elections are coming up. There is a lot of talk of ‘development’. What issue or issues would decide your vote?

Last time I voted, I voted NOTA. There is nothing happening on the ground. Just talk and we have been hearing this right from the the days of Garibi Hatao. Politics in Kerala largely based on castes, religion and money making.

Every segment has a party or an association. They all bargain for power siting their community’s numbers. Once they are in power they focus on making money and doling out favours for their cronies at the expense of the taxpayer. Same story always, most likely, I will be voting NOTA again.

You are getting back to directing. Other than financial success, what else makes you feel satisfied with your work?

I like the whole process, storytelling, casting, planning, in short bringing everything together and giving it life. Also the sense of being in charge of everything is very satisfying.
Financial success is important but the whole process of making a film and being appreciated by the audience is the icing.

You can’t decide or predict how your movie will be appreciated. The entire movie, till it is made is only in head of the director. Nobody else might understand. Can you imagine Ang Lee explaining the Brokeback Mountain story to a producer? The story of two American cowboys being gay? Most people with conventional wisdom would have said he was gone mad and the audience will never accept cowboys being depicted as homosexuals. The director saw through this and the result was for all to see.

If there is a 8 year old boy and right now he intends to become Naveen Polly when he grows up. What would your advice to him be? And what if it’s a girl wanting to become Rima Kalligal?

Cinema is very, very dangerous game. Yes you need to be super talented, work really hard, be prepared for the worst at all times. There is nothing guaranteed even if you are all the above, super talented, hardworking, prepared for sacrifices, that you will ever reach anywhere.

It’s not a 100 meter race or a marathon. There is no tangible relationship you can draw between what you put in and what you can get out of it.

It’s not easy and it is not something you can plan. If you are talented, nurture it and wait for your opportunity.