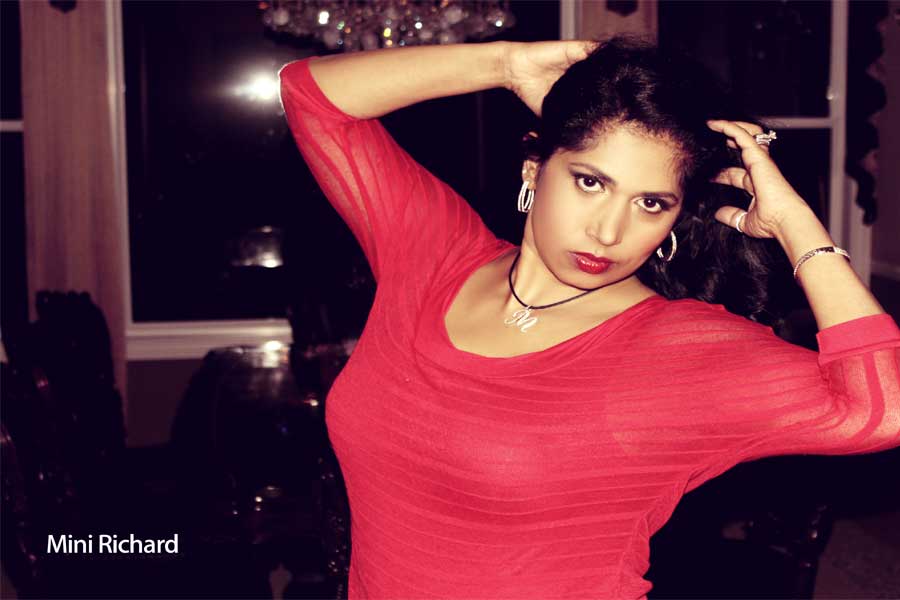 I would LOVE to do an item number with Prithviraj: Mini Richard

Not a lot of us have seen Mini Richard act in a movie. It is safe to assume the only way you have come across the California based Malayali actress is on Facebook or to a limited extend on Youtube. So why is there such a buzz about her? Is it the pictures she posts on Facebook? To find out more, we decided to ask Ms Richard a few questions which she graciously replied in detail.

From being the heart throb of virtual world to being household name in Kerala? How do you look at this transformation? Have you synced in to this feeling?

It has been a fun transformation. I have to thank all my fans that visit my pages and inter-act with me for all their love and support. I am still getting used to the idea of being a celebrity and I think it is really neat to be recognised.

When did you first dream of becoming an actress?

When I was a little girl I always liked being in front of a camera. Anytime someone was taking pictures I was there striking a pose. The movies always struck my imagination. Wishing I could be that lady on the silver screen.

What is your greatest strength as an actress?

As a new actress I would say that my confidence is one of my best assets. Being fearless can help. I still get nervous in front of the camera sometimes but I know that if I put my mind to it I can do anything.

Do you think being glamorous is an essential ingredient to become a successful actress?

Hmmmmm Glamorous. What is glamorous? Is it the 5’10” long legged skinny runway model? Or is it that Heavyset beauty who’s songs can stop your heart? I think that always trying to look your best and be your best is more important than anything else.

Tell us about other areas of interest apart from films?

Dance is one of my favourites. I love to watch all the competitive dance shows. I have also participated in several fundraisers over the years in which I was one of the guest dancers. I also have my own clothing line and simply love fashion. I like to stay up to date in all the new colours and designs.

Do you think you can make it to Bollywood and Hollywood? Why?

Yes I think I can. If I did not believe that I could aspire to greater things then what is the point of trying? We must always strive to push ourselves outside of our comfort zones and believe in our own ability to succeed.

India is fast becoming an unsafe place for women to live.  Do you think wrong portrayal of women in films have a role to play in this?

India has always been a difficult place for women to live. It is just that because of the Internet, 24 hour news and all the media attention that these atrocities are just now coming to light. I do not think “wrong portrayal” has ANYTHING to do with it. The biggest issue is educating our younger generations and teaching them that women are not property and deserve equal respect and equal protection under the law. If a woman is molested or treated badly then that is the fault of the person performing the bad action. It is NEVER the woman’s fault.

What is your view on new age Malayalam films?

aI really enjoy some of the New Age films. I loved Kottayam Female 22. I thought it was a great film. I was pleasantly surprised at the level of support from the male community considering the events that took place in the movie. What is missing in the New Age Malayalam films is that deep story that can make you cry. The last time I cried in a movie was for The Notebook (English Movie).

Who is your favourite actor, actress  and movie?

Who gave the initial break for you to films?

My first movie role was in a Telugu film. My first break came from Mr Thomas the producer of Parinkamala.

Which was your first film? How did you overcome the initial challenges of acting?

The Telugu film Yamaho Yama was technically my first film. I only had a bit part as a dance teacher. Growing up my Father was very involved in Politics and I would listen to him give speeches and that got me interested in debate. So in school I would compete in speech competitions and also dance competitions. This gave me the fundamentals that I needed to overcome the challenges of performing in front of the camera.

During the filming of Parinkamala the director and associate director gave me several compliments which really helped to boost my confidence. During the middle of the movie there was a shower scene that threw me a little. The whole crew was there including some of my Facebook fans so I got a little nervous. The director gave me some advice and I think I did well. Go see the movie and you decide. 🙂

Parankimala will hit the theatres soon, tell us about your role?

My Character’s name is Nani. She is in her 30’s. She is a sexy little village woman that is not very happy in her life with her husband played by Indrans. Nani has a crush on the young guy in the movie played by Biyon who she enjoys taking advantage of.

Any new projects in the offing?

I have had a lot of offers but want to take it slow. Once Parinkamala releases and the reviews come in. If people want to see more of me then I will definitely make myself available. I am keeping my fingers crossed. Right now it is difficult to go back and forth to India for the small roles. If a substantial role comes along then I will make the trip. It seems most of the directors think I am only interested in glamorous role but that is simply NOT the case.

They are drawing that conclusion from my Facebook shots and I don’t blame them. I have the confidence that I can play ANY role that they throw at me.

Do you personally reply to mails by fans? Tell us about the best mail you have received till date.

I get tons of emails from fans and while I simply cannot reply to all of them I do get time to read most of it. I try to reply to as many as I can. Many of them are simply asking for sexy pics that have not been posted before. That is not going to happen. Many times I will see bad comments on Facebook telling me I should not post those kinds of pictures then the same person will send a private message asking for sexy pics. Those are the hypocrites and they are never replied to. Most of the email is very sweet. There is a lot of Love out there.

Here is the text from a recent email that caught my eye.

I’m glad to be writing to you. I’m from (In the US)  (originally from Kottayam, yes I’m a ‘mallu’!). All I wanted to tell you is my heartfelt ‘thank you’ for being a game changing factor in my life. It’s a bit strange but amazingly true that you somehow became instrumental in saving my relationship. I follow you through your FB posts enjoy all your breathtaking photos (to say the least, I’m addicted). I wish you all the very best in all your endeavors’. I know this mail may drown in the sea of mails that you get everyday but if it catches your eye, please do acknowledge.

Thank you so much again!”

I showed this email to my husband and the first thing Rick told me was that I needed to reply to him. I am not sure how I helped his relationship but it was certainly a sweet note to get.

Can you recollect those romantic moments when you fell in love with your hubby Richard?

So he was the one that fell first. He saw me walking in to a friend’s house wearing a red dress. He got hold of the neighbour to find out who I was. Eventually he got my number and asked me out. I did not even consider it a date. I was still a bit naive, a little village girl from India. It was one of my American girlfriends that pointed out that it was a date and that meant he liked me. After the first date I was not that impressed.

He tried so hard to be a perfect gentleman that after the date I ended up thinking he was gay. I think I actually fell in love the second date. He came over and cooked me dinner in my house. He would not let me do anything. NOTHING!! He sautéed Shrimp in a butter and Garlic sauce. Then poured me a little wine to calm my nerves. Then he made lasagna and a salad. Did not take long after that to find out he was not gay! (Wink Wink) He is my best friend and my Soul Mate. I cannot imagine life without him. He holds my strength and happiness. I could go on and on and on!! Oh by the way he is my 007 too..

How important is Richard’s support in your acting career?

He supports me in everything I want to do. His theory is that you only have ONE life to live so you need to truly LIVE it! Acting has been on my Bucket List for a long time. (For those that do not know a Bucket List is everything you want to do before you kick the bucket) I thank him always. He is there to support me no matter what I do.

Performing item numbers is the new fad among actresses in India, with which actor do you love to do an item number?

I would LOVE to do an item number. It looks like a lot of fun. If I got to choose the actor then I would choose Prithviraj:) Hey Prithviraj Call Me 😉

Life in Kottayam and Life in California, Which one do you prefer and why?

I prefer California mostly because my boys are here. This is where they were born and raised so… Neither one speaks Malayalam (I know that was a mistake…) So Kerala can be a bit difficult for them. The best part about America is that there is a lot more respect for women also just everyday things is a lot easier.

I enjoy the freedom which America has to offer.  To be honest I miss Kerala some times.  Rick loves Kerala as well. His favourites are the Kerala food and all the pretty girls. He calls it Eye Candy Nothing more.. LOL. My favourite about Kerala is all the yummy Fish Fry which is my favourite. I have already purchased a flat in Kakkanad outside Cochin. Once the boys are grown and on their own we plan to live in Kerala on a part time basis.

A dream which you haven’t shared with anyone else yet?

Well I have a dream to write a story and make my own movie in the future. I already have the story line in my mind but I haven’t started writing yet. Who knows maybe one day….’ 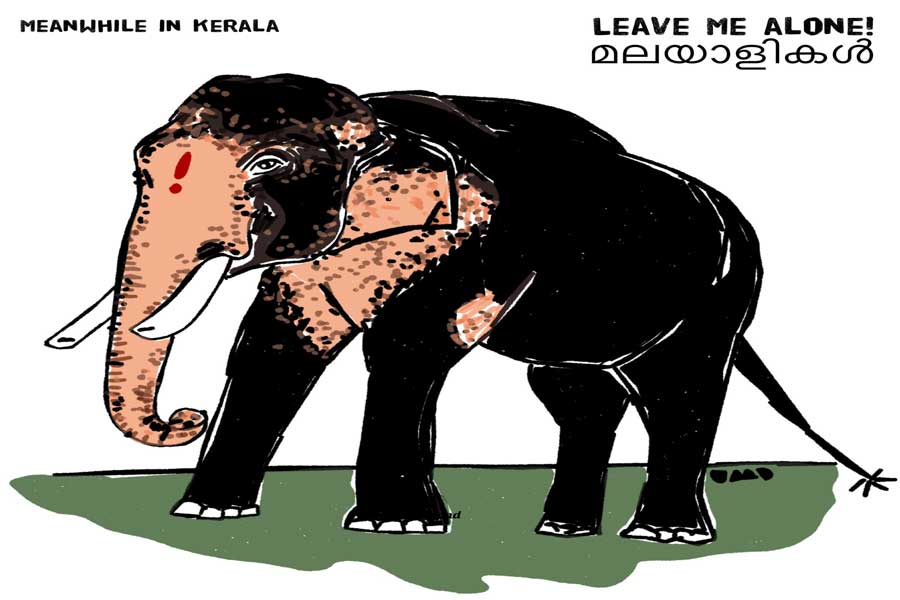